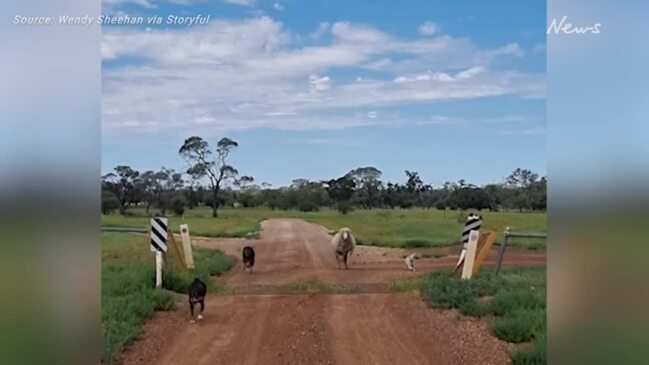 A sheep jumps over a cattle net in Queensland. A sheep follows the lead of its canine companions and made an impressive leap over a cattle net in Queensland, footage released on October 25 shows. The video was taken by Wendy Sheehan on her sheep plot in Quilpie. It shows an animal, which she calls a sheep, jumping through a net with ease. This flying sheep has fittingly appeared in a number of Sheehan videos this month as she walked 79km to raise funds for the Flying Doctor Service (that’s one kilometer per plane they fly). Sheehan thanked Baby Sheep for “helping spread the word” about her efforts. She added that she did not teach the sheep to “jump over nets or crawl under fences” as these are undesirable behaviours. She wrote that he is “self-taught” and “unlikely to hurt himself as he can easily jump over a net”. Posted by Wendy Sheehan via Storyful