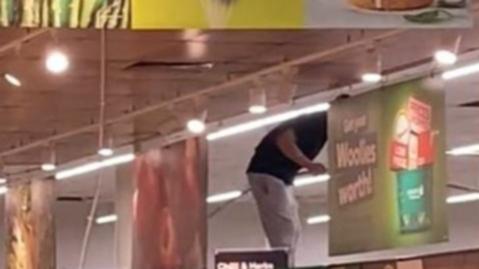 A Woolies shopper caught on camera the moment chaos descended on a Queensland supermarket when a man climbed the aisles and refused to come down.

A man stands on the shelves and appears to move erratically as he walks down the aisle.

He grabs a long piece of black material, rummaging through the rack.

It is not known whether he was shouting the name of a friend or a family member.

A Woolworths employee then tells the woman filming that she cannot film in the store.

The woman runs to another checkpoint and continues to film the man.

From there, the video shows two police officers standing next to the man and trying to talk him down.

A Queensland Police spokesman said it would be “inappropriate” to comment due to the mental health aspects of the incident.

A man spins around a pole connected to the ceiling and tries to talk to the police.

However, he looks confused and disoriented.

NCA Newswire was unable to reach Woolworths for comment.