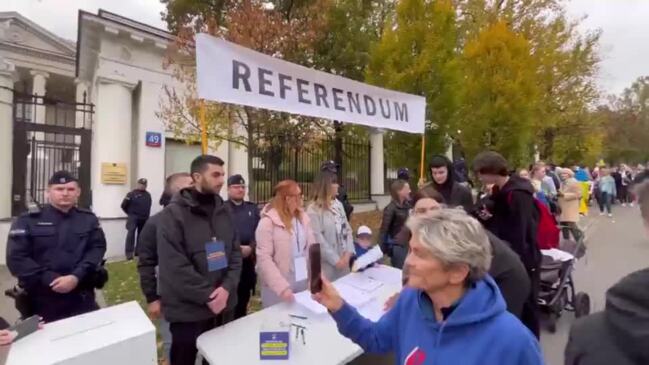 On Saturday, October 15, demonstrators protested Russia’s move to annex part of Ukraine by staging a mock referendum on the annexation of the Russian embassy in Warsaw, Poland. Activist group Euromaidan Warszawa presented false data on organized voting, including a turnout of 127.8 percent, condemning the “absurd results” of recent referendums in the Russian-occupied regions of Ukraine. The footage shows a queue of people waiting to “vote”, many holding Ukrainian flags. Activists said that “voters” decided to annex the embassy. At the end of September, in the so-called Donetsk and Luhansk People’s Republics, as well as in the Zaporozhye and Kherson regions, a vote was held on the annexation of the occupied territories of Ukraine. Russian President Vladimir Putin announced the annexation of the regions on September 30. Photo credit: Euromaidan Warszawa via Storyful