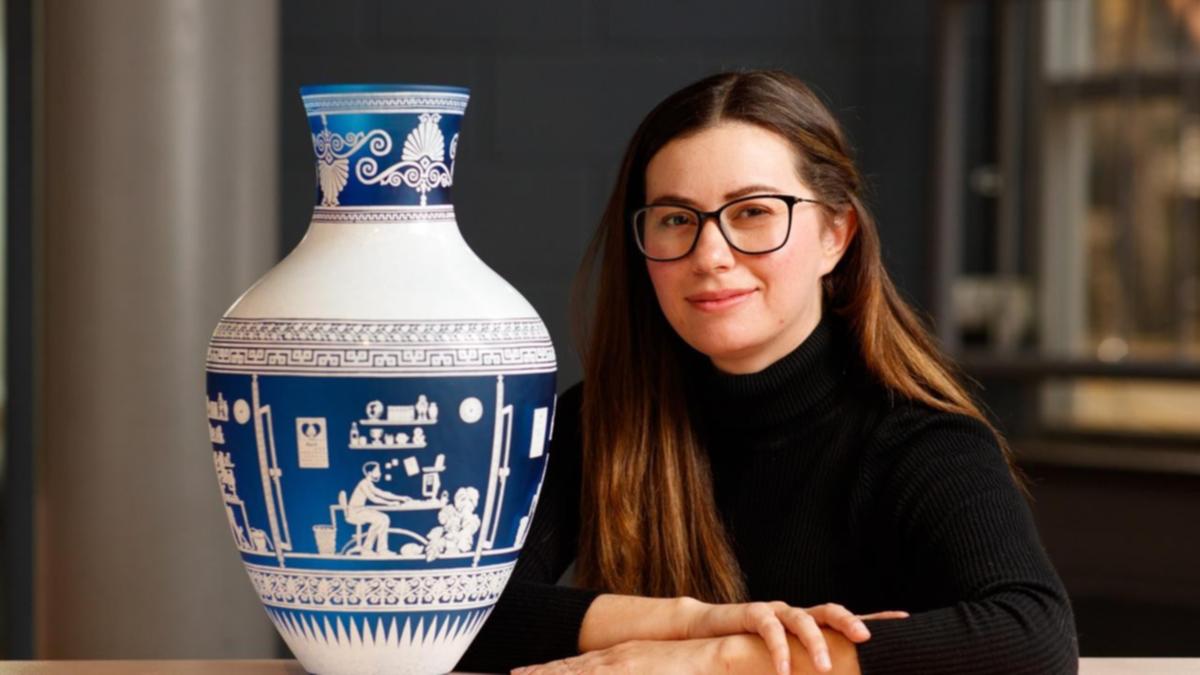 Artist Jessica Murtagh sandblasts ancient glass forms with images of everyday life. Her works are exquisite, even if modern life does not always create a beautiful picture.

Murtagh’s glass vessels are inspired by Athenian amphorae, but instead of classical scenes, they show people queuing at Centrelink, wearing masks and scrolling through their phones.

The artist told AAP that her Modern Relics series was a way to ensure that moments of modern life are not forgotten, even if digital records of that time no longer exist.

The darkly comic works are also a commentary on today’s technology-driven lifestyle and question how the society of the future might judge the way people live today.

One of the pieces, Quality Time Together, Apart, shows a stylized ancient Greek figure playing a computer game on one side, while the other shows a woman in a toga looking at a laptop screen.

Another piece was inspired by the early days of the pandemic, showing queues of masked people waiting outside Centrelink.

“It was an extraordinary time, we were told we were all in this together, but it was really clear that we really weren’t … it was a message that didn’t sit right,” Murtagh said.

Each of the works in the Modern Relics series took about three weeks to create, using an updated take on an ancient technique known as the cameo.

Murtha draws the images digitally and transfers them to a vinyl film, which she carefully applies to the glass before sandblasting the surface and hand engraving the details.

The 36-year-old has been making glass for five years and works at a jam factory in Adelaide that employs some of Australia’s leading glass artists.

Her work has been acquired by the National Gallery of Victoria, the Powerhouse Museum in Sydney and Parliament House in Canberra.

Some of her previous work was inspired by the 2019 Bunyip bushfires in Victoria, with etched forms depicting charred trees and luminous orange glass reminiscent of flames and flying sparks.

She is working on a solo exhibition, Modern Relics, at the Grainger Gallery in Canberra in April.