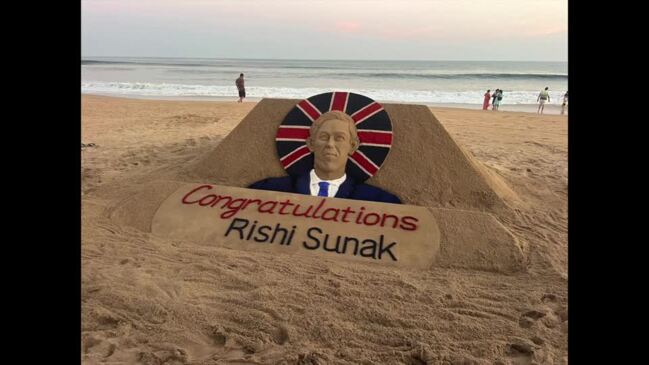 On October 25, a sand sculptor in the Indian city of Puri paid tribute to Rishi Sunak after he was appointed as Britain’s first British-Asian and Hindu Prime Minister. “Heartiest congratulations @RishiSunak,” artist Sudarsan Pattnaik wrote in posts on Instagram and Facebook. Patnaik regularly creates vibrant artworks on Puri Beach and recently created sculptures in honor of the Indian national cricket team, the Hindu festival of Diwali and the FIFA U-17 World Cup held in India in October and November. From 2017 to 2021, he held the Guinness World Record for the ‘tallest sandcastle’ in the world after building a 48-foot tall sculpture at Puri Beach. According to the Guinness Book of World Records, the record was broken in Denmark in July 2021. Posted by Sudarsan Pattnaik via Storyful