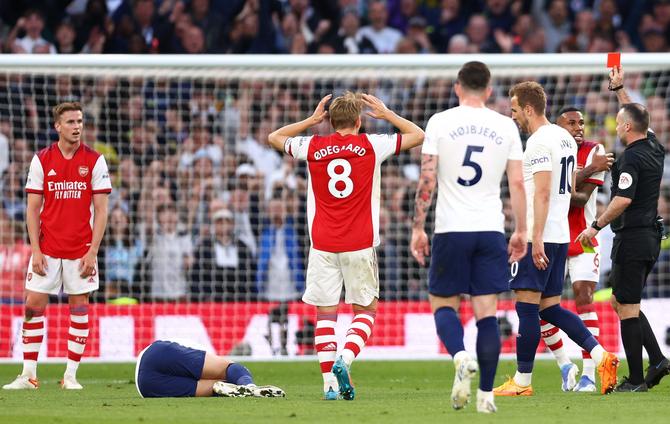 Arsenal went for what many considered the most important North London derby in Premier League history, knowing the win would secure football in the Champions League next season.

But at Tottenham Hotspur, it blew up the Spurs, and the removal of Rob Holding in the 33rd minute due to two warnings played a big part – although the host was already leading 1-0 thanks to a penalty from Harry Kane.

Kane took second place in the Spurs shortly after the Holding’s dismissal, and Son Hyun Min took the game out of the Gunners early in the second half when Antonio Conte’s charges moved one point away from Arsenal in the last two games of the season.

If Arsenal eventually miss football in the Champions League again, many will mark the defeat as a key moment, and Arteta would seem to have put the responsibility on the feet of officials.

Asked about his “thoughts” about the game Arteta said: “Well, if I say what I think, I am rejected [for] six months, so I can’t say.

“I’m allowed to give my interpretation of what happened in the game, but I can’t lie, so I prefer not to say what I think.”

But it was unclear by what decision Artet felt offended, for Holding may have been lucky not to have already been sent before his rigid barge on the Son, which in itself could have turned red.

It was his fourth foul of the game, more than he had ever committed in a single Premier League match, despite playing just 33 minutes.

Similarly, the decision to fine Cedric Soares for pushing Sona in the zone seemed unequivocal to referee Paul Tierney.

Arteta initially refused to delve, as he reiterated his belief that he would be banned if he was honest, but eventually he summoned officials.

“You can ask the arbitrator to come in front of the camera and explain your decisions,” he said. “It’s a pity, because today such a beautiful game was destroyed.”

Arsenal have two more matches to take fourth place – in the last games of the season, he faces “Newcastle United” and “Everton”.