Nunavut, Canada, has an extensive history of exploration and mining and is well-known for its high-grade geology. Considered a tier 1 mining jurisdiction, Nunavut has seen a significant surge in mining activity throughout the last decade. Although COVID-19 dealt a setback in mineral exploration in 2020 — with just C$70.7 million spent out of a projected C$115 million — in 2021, exploration spending was back on track and peaked at C$123.2 million. With all land claims settled, permits in place for exploration and conventional environmental laws, there’s no geopolitical risk with Nunavut’s proactive and responsive local government. 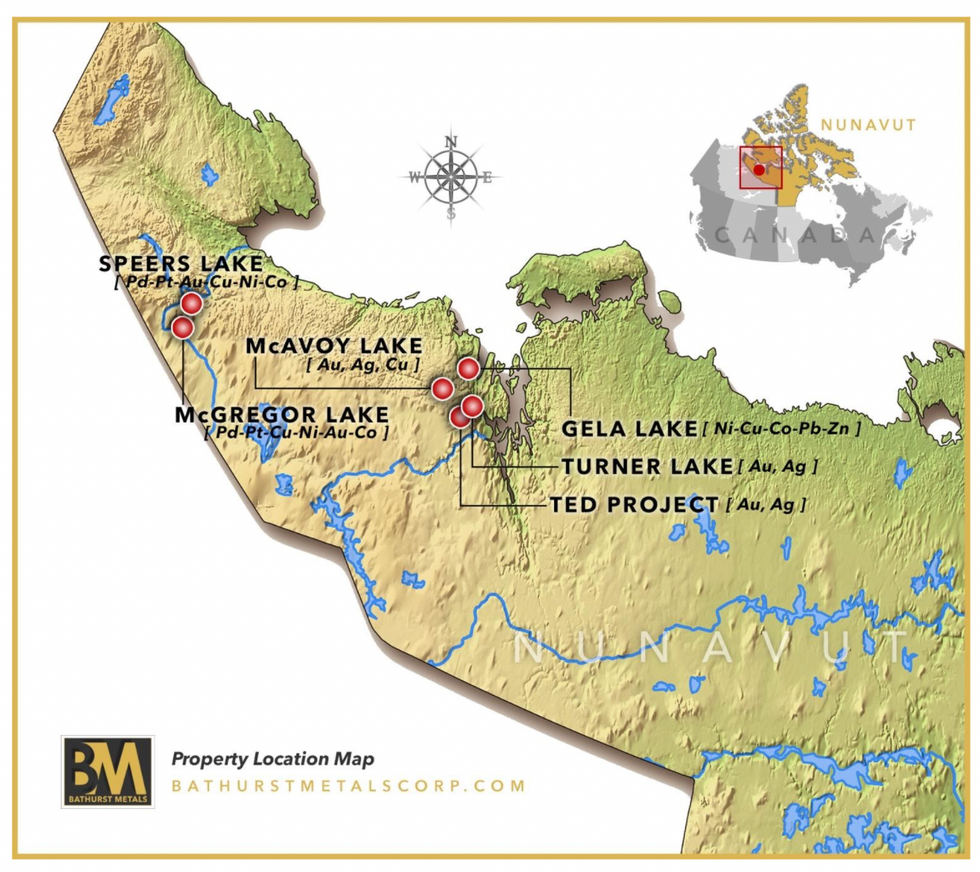 ​Bathurst Metals Corp. (TSXV:BMV, OTC:BMVVF) is a mineral exploration company operating in Nunavut with their portfolio of highly prospective projects which include the Turner Lake, TED property, Gela Lake, McGregor Lake, Speers Lake and McAvoy Lake. All properties have had surface work and/or drilling completed, all of which demonstrated excellent results. The company is led by an accomplished board and management team, bringing world-class credentials and decades of experience to the team. 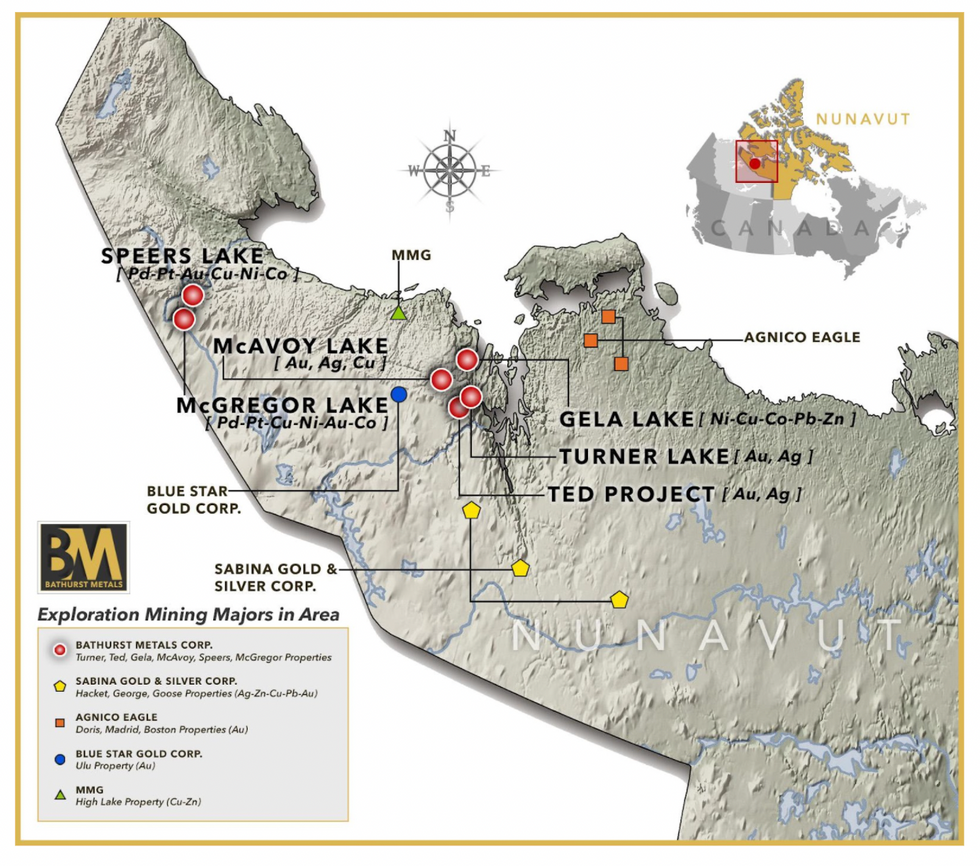 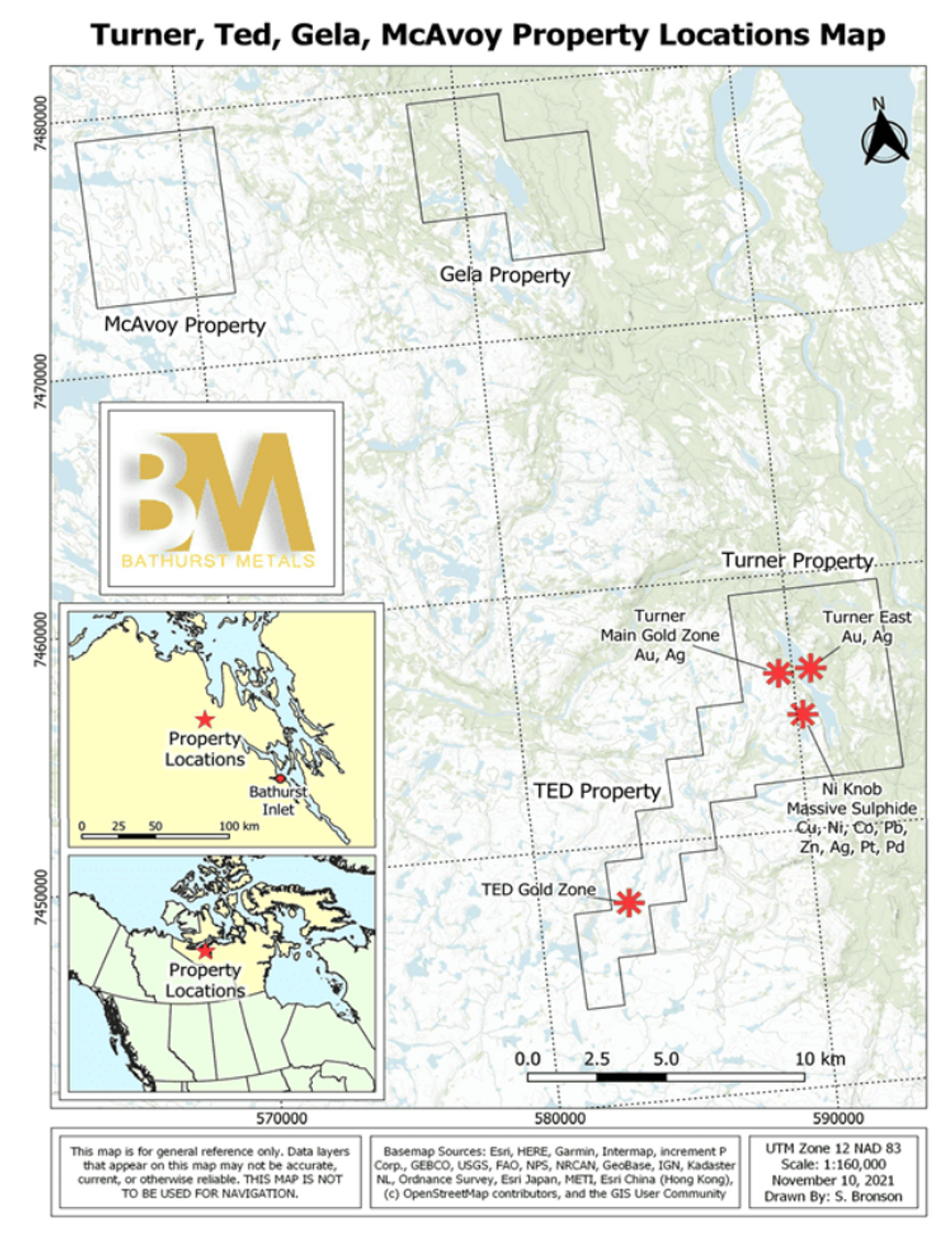 Bathurst Metals is proud to present a compelling investment opportunity in the gold and metals exploration sectors and believes the historical work on their project portfolio shows excellent potential for gold, silver, copper, nickel, cobalt, platinum and palladium deposits. Because Bathurst Metals owns all the properties, there’s no geopolitical risk and no native land issues, making it equally enticing to investors. 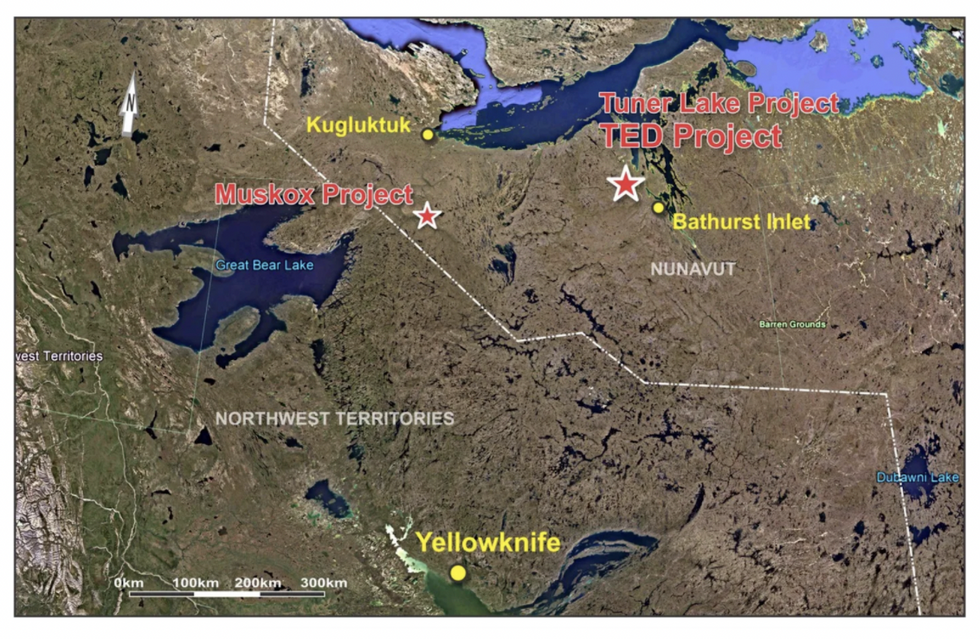 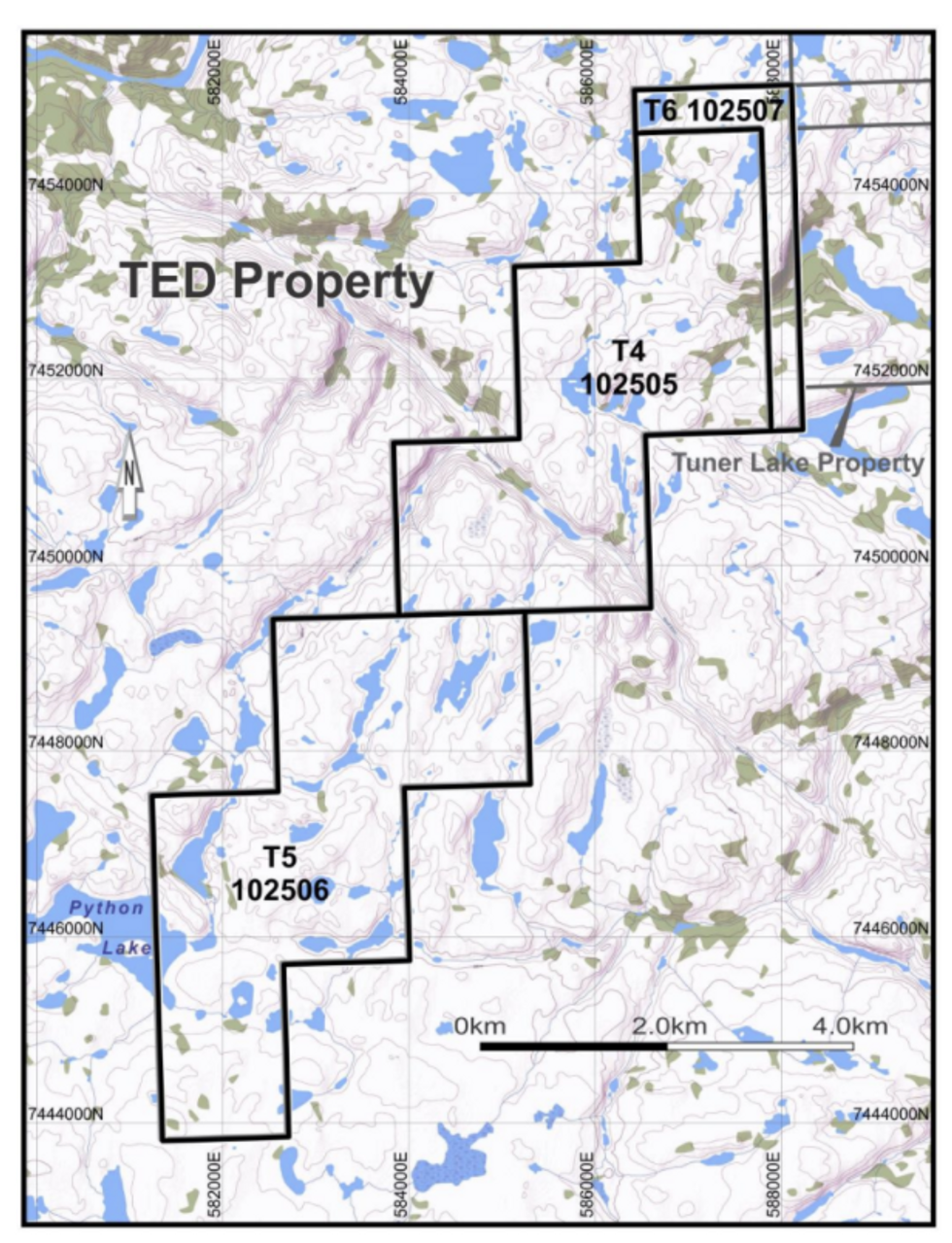 The TED project consists of the T4-6 mineral claims staked by Bathurst Metals spanning across their 3,500 hectare property. This property mainly consists of metasediments and conglomerates — key lithologies found at other successful goldmines like Sabina, Meadowbank, and Meliadine, also located in western Nunavut.

Bathurst Metals announced high grade gold assay results from 18 rock grab samples collected during their 2021 summer sampling program from the TED Gold Zone of the Turner Lake project. Six (6) of the (18) samples assayed had values greater than 20 g/tonne gold. One sample is especially notable assayed at a value of 106 g/tonne gold. Historical grab samples were recorded up to 138.2g/t, 70.3g/t, 68.9g/t, 42.9g/t and 33.8g/t gold.

Bathurst Metals’ McGregor Lake project is a palladium, platinum and gold property in Western Nunavut, approximately 300 kilometers south of Kugluktuk and about 100 kilometers east of the Northwest Territory border.

The McGregor Lake project consists of 11 mineral claims that cover roughly 13,125 hectares across the exposed Layered Muskox Ultramafic Intrusive (LMUI). Airborne surveys have shown that this LMUI may be the largest layered ultramafic complex ever seen, with exposed surfaces over 80 kilometers along the strike. Geophysical, geochemical and geological mapping, along with historical diamond drilling, have indicated a minimum of two sulfide pulses in the area.

The Speers Lake project is located adjacent to the north side of the McGregor Lake Project, which is approximately 300 kilometers south of Kugluktuk and about 100 kilometers east of the Northwest Territory border.

The Speers Lake area was first explored in the 1950s but wasn’t looked at again until 30 years later in the 1980s. Scattered diamond drill testing was once again completed between 1999 and 2007 and geophysical, geochemical and geological mapping took place. At least two sulfide pulses were found along the LMUI, containing high concentrations of nickel and copper along with gold, platinum 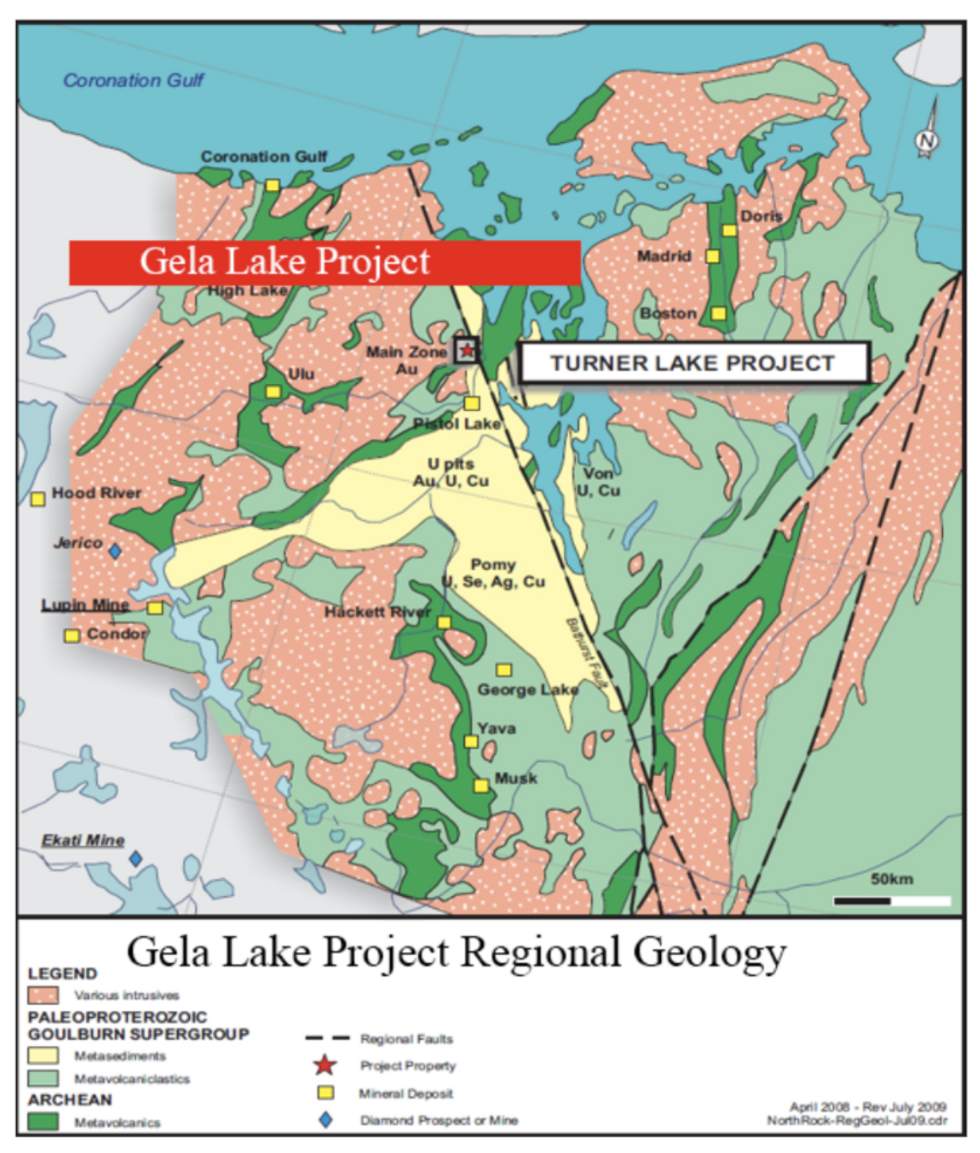 The Gela Lake project is located close to tidewater in the Kitikmeot region of western Nunavut, in the same region as the Turner and McAvoy projects.

This project has the potential for a large tonnage deposit of cobalt, nickel and copper. There have been high-grade copper mineralization in quartz veins that are affiliated with cobalt blooms occurring with a monzogabbro intrusive. This intrusive found along the regional Bathurst Inlet Fault, is known to outcrop over a two (2) kilometer strike length.

Bathurst Metals’ McAvoy Lake project has a four (4) kilometer stretch of gold mineralization formed along the north-south Bathurst Inlet Fault. The project is located close to tidewater in the Kitikmeot region of western Nunavut in proximity to the Turner and Gela Lakes projects.

Grab and channel samples in the 1980s yielded 64.0 grams/tonne gold, and there are veins of quartz and felsic dyking with pyrite, trace amounts of chalcopyrite and arsenopyrite that vary in size from 0.2 to 2.5 meters wide. Besides saw marks from the channel samples, there is no evidence of any previous exploratory sampling.

Harold Forzley is the founding director and CEO of the company. He has over 30 years experience in managing and financing public and private companies. He’s been involved in many public companies at various stages of exploration and development, with several that resulted in the sale and development of major mines. Hardy’s primary focus is on project management, strategic planning and financing activities. Mr. Forzley has a B Comm. degree from Simon Fraser University and a CPA.CA designation.

Lorne Warner is a registered professional geologist in B.C, NWT and Nunavut with over 30 years’ experience in underground and open pit mining mineral exploration. His experience includes working for senior mining companies, Noranda Exploration and Placer Dome Inc, as well as being Vice President of several junior mining companies. Lorne’s team was first to conduct exploration at Detour Lake after closure by Placer Dome. They discovered the western extension of the Detour Lake Gold Deposit, that’s now in production in Ontario. They also discovered the Falea North Zone – Uranium, Silver, Copper Deposit and the Fatou Main Gold Deposit, both in Mali, West Africa. His career started in British Columbia, but he has now worked throughout the Americas, Africa, Asia and Australia. Lorne is currently a director, President and CEO of Tarachi Gold Corp. in Mexico and is working as a director of Indigo Exploration Inc. in West Africa. Lorne McLeod Warner graduated from the University of Alberta in 1986 with a BSc. in Geology.

Mr. McAdam is a Senior Executive with over 30 years of finance and operations experience in large and small capitalization companies, David has extensive expertise in fund raising (over $350 million in equity and debt), financial operations and planning, due diligence, investor relations (TSX.V and JSE), risk management and regulatory compliance. David has been the Chief Financial Officer of several public and private companies across various industry sectors including a number of public and private mining companies He is currently on the Board of Interra Copper Corp, where he chairs the Audit Committee. David has a Bachelor of Commerce degree from the University of British Columbia

Greg Bronson is a Professional Geologist with 30 years exploration and development experience in mining and the oil and gas industry. He brings excellent skills to manage the complex technical issues of mineral exploration. He has worked in Canada for the major mining company called Noranda Exploration (now Xstrata) and for many junior resource companies, including Rockgate Capital Corp (now Denison Mines), Sentinel Resources Corp, and others.

Mr. Bronson is President of Benjamin Hill Mining, a junior mining company with interests and active projects in Sonora, Mexico. Mr. Bronson sits on the board of Sentinel Resources Corp. and oil and gas junior Avanti Energy Inc.

Stephen Millen’s career has spanned over four decades, covering communications, marketing, sales and general management in the resource exploration and electronic security business. Stephen’s experience ranges from entrepreneurial start-ups to senior management with a multinational corporation. He has served as an officer and director of several public companies focusing on corporate communications and business development.

Dr. Zhang has over 30 years experience as a consulting geologist, well recognized for his specialized work in Structural Geology. He received his Ph.D. from McGill University in 1994 and has been working extensively throughout Canada, the United States, Asia and Africa. Dr. Zhang is a Fellow of the Geological Association of Canada.

Mr. Armstrong has held many board positions in public, private and not-for-profit entities, and has extensive knowledge of corporate and philanthropic board governance. Mr. Armstrong received his Executive MBA from Harvard Business School.

Ken Hallat acquired Savolite Soap in 1967 and, through acquisitions, grew it into one of the largest privately owned cleaning chemical manufacturers in North America. He co-founded PlanetClean and expanded it into a 15 chain distribution group that was sold to Bunzl, a UK based public company.

Mr. Hallat is a past director of SunRype Products, founding director and shareholder of Sleeman Breweries and his family company, Novas Capital Corp. has invested in a wide range of business assets. He has served on the boards of many public, private and not-for-profit companies and foundations and has an extensive working knowledge of corporate and philanthropic board governance. He received his MBA (Hons.) from the University of British Columbia.