Will silver offer you the same protection as gold? Some analysts say silver can protect you in times of global turmoil. It’s widely considered a safe way to store value, similar to gold. In addition, silver typically has volatile prices, which can benefit investors. Analysts expect the precious metal to reach US$30 per ounce in 2022 compared to US$23 per ounce.

Yet, silver is more than a precious metal used to hedge against inflation and uncertainty. It also has industrial uses that create a steady demand for the precious metal. For example, in 2021, approximately 508.2 million ounces of silver were used in industrial fabrication, such as producing solar panels and automotive electrical systems. In addition, investors have options; they can invest in silver bullion, commodities markets, or silver mining companies to capitalize on the precious metal. So how will you profit from silver?

Southern Silver Exploration (TSXV:SSV,OTCQX:SSVFF) is an exploration mining company focused on creating value for shareholders from its unique silver assets. The company’s projects are located throughout North America, strategically positioned in politically safe mining locations. Its flagship project, Cerro Las Minitas, is located in Durango, Mexico and is poised to become one of the top high-grade silver projects in the world. Mexico is known for containing high-grade silver deposits, and Southern Silver Exploration’s flagship project is an undeveloped asset with excellent upside potential.

Southern Silver Exploration has created a mine life of over 15 years, which will create enduring value for a third party that may acquire the mine in the future. In addition, the company’s cost of exploration per ounce is C$0.09, which is much lower than its competition. As a result, the Cerro Las Minitas mine may become one of the top three silver mines as development continues.

The company has two additional, 100-percent-owned assets, the Oro Copper-Gold Project and the Hermanas Silver Gold-Silver project. These assets expose shareholders to additional markets beyond silver. In addition, unlike its flagship project, these two assets are located in New Mexico, USA.

Multiple members of the management team have experience leading projects within Mexico. These leaders have an established network of relationships with Mexican nationals who work with the company in all aspects of exploration and development. Southern Silver Exploration is proud of its positive relationship with the local government. 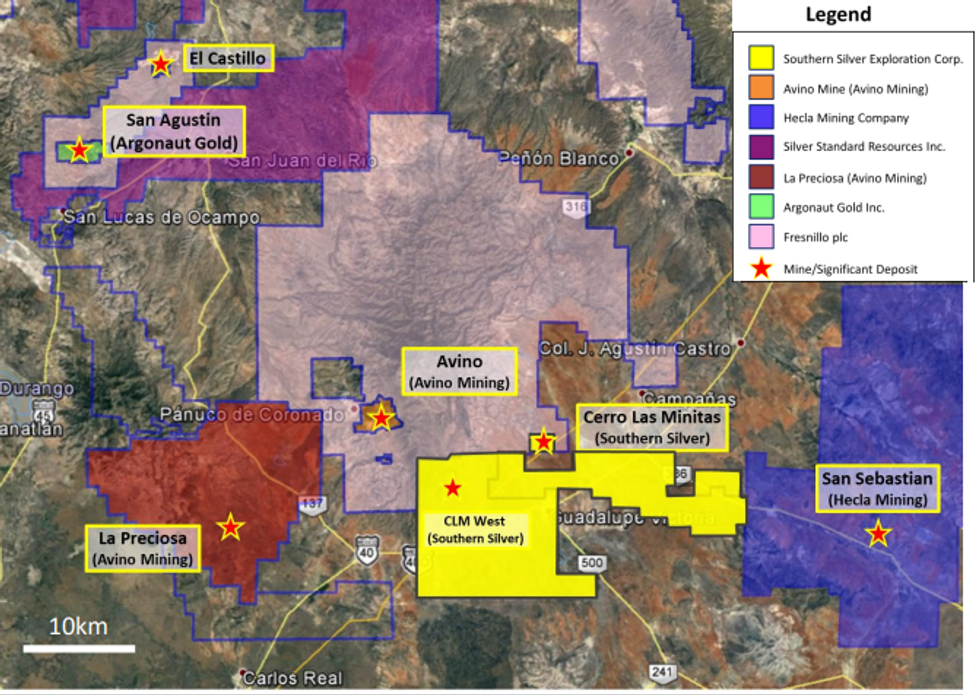 The company’s flagship project is set to become one of the world’s most productive high-grade silver mines. A resource estimate completed in 2021 indicates the presence of an indicated resource of 42.1 million ounces of silver and an inferred resource of 73.6 million ounces of silver. The company is presently working on a Preliminary Economic Assessment, which is expected to be completed in Q2 of 2022. 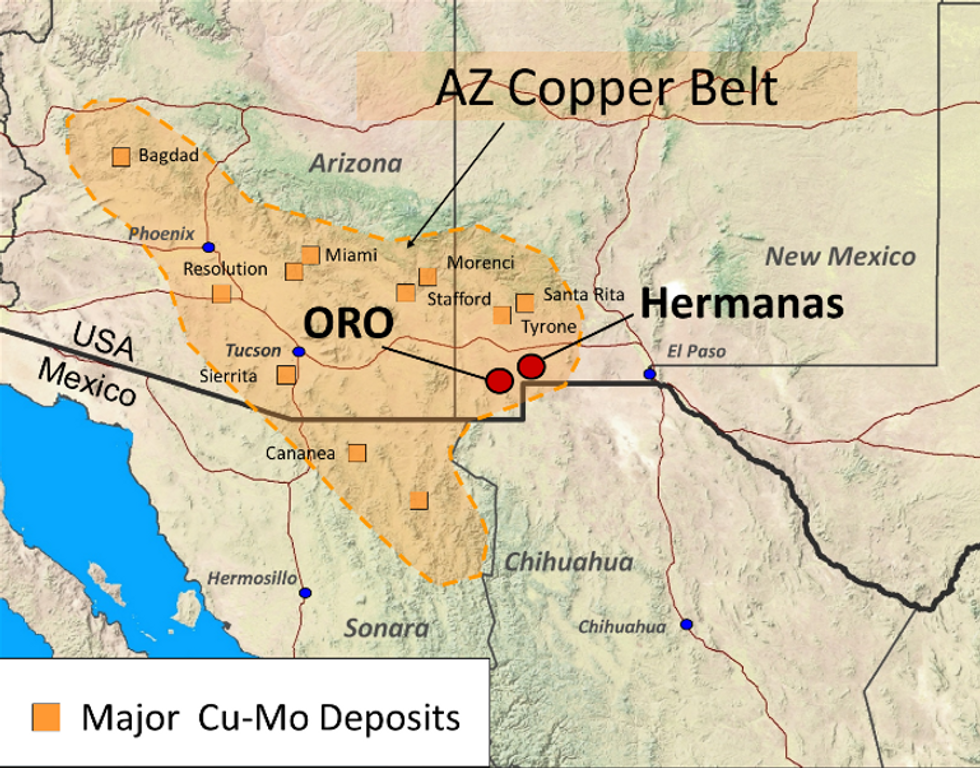 The newly acquired project has favorable geology that may contain an extensive epithermal gold-silver vein system. However, limited historic drilling leaves the project area largely unexplored. The asset has been optioned by Southern Silver Exploration to acquire 100 percent of the project.

Lawrence Page obtained his law degree from the University of British Columbia in 1964. He was called to the bar of British Columbia in 1965, where he has continued practicing in natural resource law and corporate and securities law. Through his experience with natural resource companies; and, in particular, precious metals development, Page has established a unique relationship with financiers, geologists, and consultants. He has been counsel for public companies which have discovered and developed producing mines in North America. Specifically, he has been a director and officer of companies that have discovered and brought to fruition the David Bell and Page Williams mines in Ontario, the Snip, Eskay Creek, and Mascot Gold Mines in British Columbia, as well as the discovery of the Penasquito Mine in Mexico. Page is the principal of the Manex Resource Group of Vancouver, which provides administrative, financial, corporate, corporate finance, and geological services to several public companies in the mineral resource sector. He currently serves as a director of four public companies, including Bravada Gold, Southern Silver Exploration, Equity Metals, and Valterra Resource.

Mr. Macdonald is currently the vice president of geological services for the Manex Resource Group; and, in such capacity, has been an executive for several publicly listed companies, including Equity Metals, Homestake Resource,formerly Bravo Gold, and Southern Silver Exploration. Macdonald served as exploration manager for Valterra Resource, Duncastle Gold, and Fortune River Resource. He has overseen the exploration of many projects throughout North America including the discovery and delineation of the high-grade 1.2 million ounces Homestake Ridge gold-silver deposit in Northern British Columbia. Macdonald is currently advancing Southern Silver’s 23.9 million tonne Cerro Las Minitas silver-lead-zinc project in Durango State, Mexico. Macdonald graduated with a bachelor’s of science degree, with honours, from the Memorial University of Newfoundland in 1990, after which he earned a master’s of science degree from the University of British Columbia in 1999. Over his career in geosciences, Macdonald’s work has focused on vein and intrusion-related gold systems, volcanogenic massive sulphide (VMS), and epithermal environments. Before joining Manex, Macdonald worked as a geologist with the British Columbia Geological Survey and Teck Exploration on Alaska, Peru, and British Columbia projects.

Graham Thatcher moved from London, England, to Vancouver, British Columbia, in 2006. Specializing in financial reporting and auditing across a breadth of business sectors in the UK and Canada, he brings extensive experience operating with International Financial Reporting Standards (IFRS) and paperless systems. He is also a senior accountant at Manex Resource Group, which provides administrative, financial, corporate, corporate finance, and geological services to several public companies in the mineral resource sector. Before this, he worked in public practice at Smythe Ratcliffe, focusing on companies in the mining and exploration sector. Thatcher obtained a bachelor’s of arts degree in economics, with honours, from Lancaster University in 1995, which included a one year program at the University of British Columbia. He is also a member of the Association of Chartered Certified Accountants (ACCA) and a volunteer board member and treasurer at Heritage Hall Preservation Society, a non-profit charitable organization whose mandate is to restore and manage Heritage Hall, a landmark building located in Vancouver.

Arie Page obtained her law degree in 2004 and was called to the bar of British Columbia in 2005. Page has worked with public resource companies in the minerals sector for over 14 years. Currently, she serves as corporate secretary to several reporting issuers, including Bravada Gold, Pacific Ridge Exploration, Southern Silver Exploration., Equity Metals, Valterra Resource, and Velocity Minerals.

Roger Scammell has 40 years of experience in the mining and exploration industry in North America, México, and Guatemala, principally with epithermal gold-silver, polymetallic base metal, and nickel and coal deposits. He was the country manager of México for Teck and its Mexican subsidiary, Minera Teck, from 1992 to 2002. Under his direction, Minera Teck discovered the 72 million tonne San Nicolas volcanogenic massive sulfide deposit in Zacatecas, México and the El Limon gold skarn in Guerrero, México. From 2004 until December 2010, he was initially the vice president of exploration and later president of Scorpio Mining and its Mexican subsidiary Minera Cosalá. During this time, he was responsible for the administration and execution of the exploration, development, and initial production of the Nuestra Señora polymetallic silver mine in Sonora, México, supervising the construction of the 1,400-tonnes-per day flotation mill.

Eugene Spiering is an exploration geologist with over 30 years of international experience in mineral exploration and senior-level project management in the Western United States, South America, and Europe. As vice president of exploration with Rio Narcea Gold Mines, he participated in every aspect of the mining industry from discovery through project development and production of the El Valle gold and Aguablanca nickel mines in Spain. He was previously vice president of exploration for Quaterra Resources and Duncastle Gold. Spiering is a registered member of the Society of Mining, Metallurgy, & Exploration and a fellow member of Australasian Institute of Mining and Metallurgy.

Nigel Bunting is based in London and is an active participant in several public and private resource ventures. He is a director of Bravada Gold and Southern Silver Exploration, both companies quoted on the TSXV exchange. Bunting identifies early-stage opportunities in the resource sector and arranges financings to advance projects to the public market. He is a director of Anglia Registrars, trading as Inform Direct, one of the UK’s leading cloud-based technology companies relating to company formation, administration, and secretarial services. Bunting is also a director of MFB Corporate Member, an insurance underwriter at Lloyds of London.

Dr. Larry Buchanan serves as the chief geologist and president of Electrum Resources. Dr. Buchanan has served as the chief geologist of Apex since 1995. Before that, he served as a principal advisor of international operations at Apex Silver Mines. He is a noted exploration geologist with a reputation as one of the industry’s leading experts on epithermal deposits. He has written a definitive text that describes the genesis and exploration of precious metal epithermal veins systems. Dr. Buchanan serves as a director of Begeyge Minera. He was previously a director of TintinaGold Resources, formerly Mantra Mining, from 2009 to 2011. His analysis of such deposits has given rise to the industry paradigm known as ‘The Buchanan Model.’ He has played a crucial role in identifying several multi-million-ounce gold deposits and developed implementation programs for numerous currently producing mines. His consulting clients included Cyprus Minerals, FMC, Total Resources, and Fischer-Watt Gold. Dr. Buchanan is the 2006 recipient of the Thayer Lindsley award for discovering the San Cristobal mine, located in the Potosi Mining district of Bolivia. He holds a bachelor’s of science and a doctoral degree in economic geology from the Colorado School of Mines.

Peter Cheesbrough is president of the exploration division of The Electrum Group. He has over 30 years of experience as a senior financial executive of public and private companies in various industries, including mining. He was the chief financial officer of Echo Bay Mines. Most recently, Cheesbrough was chief financial officer of ZeaChem, and the executive vice president and chief financial officer for CIBER, a global information technology consulting, services, and outsourcing company listed on the NYSE. He is a fellow of the Institute of Chartered Accountants in England and Wales and a member of the Institute of Chartered Accountants of Alberta.

Gina Jones is the chief financial officer and chief compliance officer of PenderFund Capital Management. Previously, Jones was the chief operating officer and chief financial officer of an independent brokerage firm in Vancouver, also serving as CFO for its US subsidiary. Before that, Jones was CFO at two Vancouver investment dealers. She holds a bachelor’s of commerce degree from UBC, articled with PricewaterhouseCoopers, and is a chartered professional accountant (CPA), chartered accountant (CA) and has a corporate finance (CF) specialty designation. In addition, she holds the ICD.D designation from the Institute of Corporate Directors.