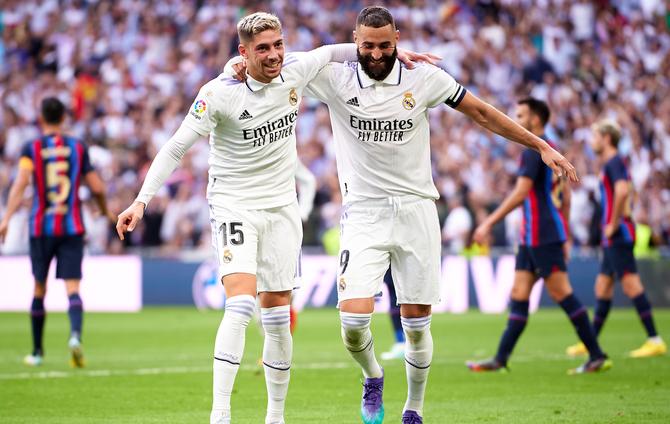 Barca had conceded just one goal in eight league games this season before the visit to the Santiago Bernabeu, but two clinical finishes from Benzema and Valverde saw them two goals down at the break.

Xavi pulled one back with seven minutes remaining through Ferran Torres, but the hosts restored their two-goal lead in stoppage time thanks to Rodrigo’s penalty.

The result marked Barca’s first league defeat of the campaign, with a win for Los Blancos taking them three points clear of their arch-rivals at the top of the table.

Madrid took the lead in the 12th minute when Benzema fired home from 12 yards after Marc-Andre ter Stegen ran off his line to deny Vinicius Junior.

Barca had a great chance to equalize in the 25th minute, but a struggling Robert Lewandowski somehow managed to tip the ball over the bar from just a few yards after Rafinha’s cross.

Xavi’s men were punished for that miss 10 minutes before the break when Valverde fired into Ter Stegen’s bottom right corner from 20 yards.

Benzema thought he had scored a superb second goal shortly after the break, but his curling shot from 20 yards was ruled out for offside.

Substitute Torres reduced the deficit with a simple strike at the back post after excellent work from Ansu Fati, but Rodrigo wrapped up Madrid’s victory from the spot after being brought down by Eric Garcia – a decision that was ruled on after a VAR review.