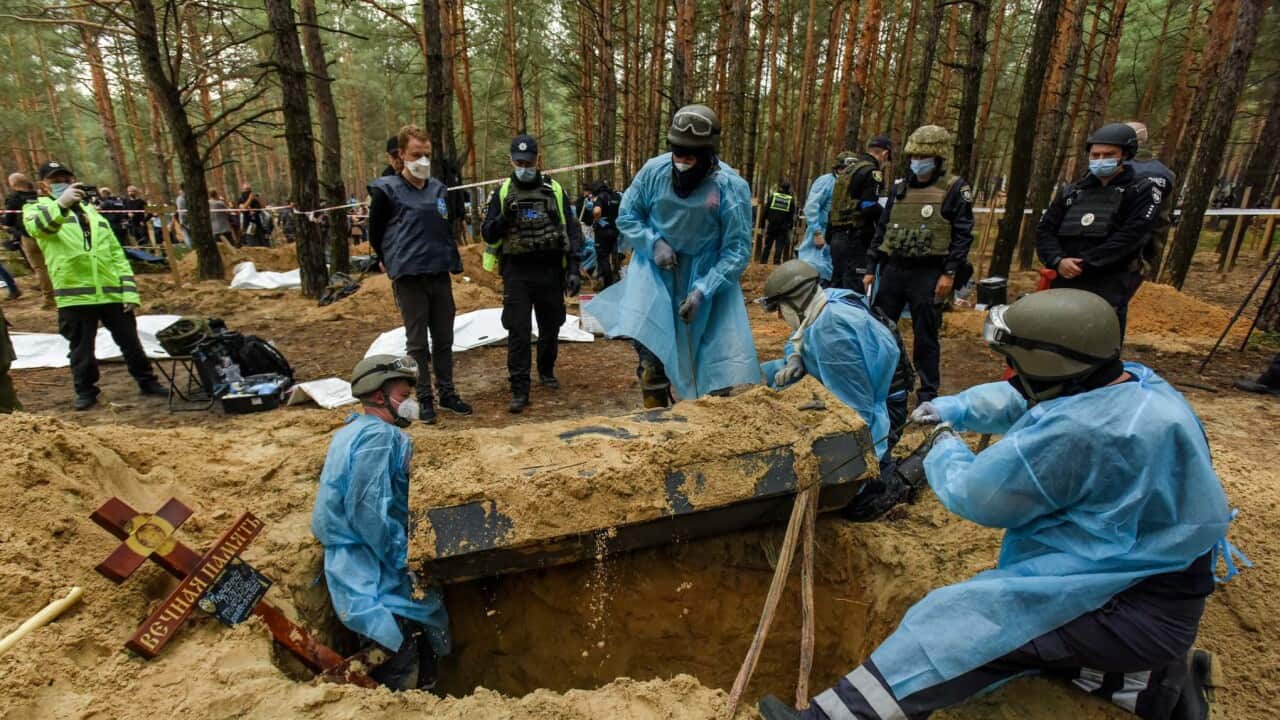 Dressed in white hazmat suits and wearing rubber gloves, Ukrainian emergency services dug up bodies on Saturday from a wooded burial ground in territory recently retaken from Russian forces, while townspeople searched for dead relatives.
Ukraine says hundreds of those buried at the site discovered this week, including at least 17 Ukrainian soldiers found in a mass grave on Friday, and others who may be civilians are buried in individual graves marked by flimsy wooden crosses.

The cause of death has not yet been established, although residents claim that some graves near the town of Izyum are people who died in an airstrike.

What did they find?

Ukrainian authorities said that at least one of the bodies had bound hands and traces of a rope around the neck.

Moscow does not comment on the discovery of burials. He has regularly denied committing war crimes or attacks on civilians.

Reuters saw workers painstakingly exhume at least five graves with shovels, while police experts and investigators documented the findings on camera and examined the bodies on sandy soil between pine trunks.

Investigators said the condition of the teeth indicated that some of the people were elderly.
“Exhumations are underway, their identities have not been established at the moment,” said regional prosecutor Roman Kasyanenko.

He said three bodies dug up on Friday had been identified.

Clutching a neatly written list of names and numbers, resident Uladzimir Kolesnik walked among the graves in search of relatives he said died in an airstrike on a residential building shortly before the city fell in April, when invaders swept through northeastern Kharkiv.

What happened before the opening?

Last week, Ukraine recaptured dozens of towns and villages in the area as a result of a surprise counterattack.

Kharkiv Oblast Governor Oleg Sinegubav said on Friday that he was aware of mass casualties from shells hitting a five-story residential building shortly before the Russian occupation.

In May, a Ukrainian military official said that more than 40 people were killed in an attack in the city.

Reuters could not immediately verify details of the attack or who buried the bodies.

Mr. Kalesnik said he knew his relatives had been taken to the burial site and were in some numbered graves, but he did not dare to visit while the city was under occupation.
He stopped in front of the cross with the number 199 and, after checking the list, carefully hung a tag with the name of his cousin Yuri Yakovenka on it.

The list was given to him by the local funeral company that excavated the graves, he said.
“They buried the bodies in sacks, without coffins, without anything. They didn’t let me in at first. [Russians] said that it was obtained and asked to wait. And there were a lot of them in the forest, so it was scary to come here,” Mr. Kolensk told Reuters.

Ukrainian President Volodymyr Zelenskyi said on Saturday that officials had found evidence of torture on the exhumed bodies, adding that about 10 torture sites had been found in the territory liberated this month.

How is this reported in Russia?

The head of the administration established by Russia, which last week left the northeastern territory around Izyum, accused the Ukrainians of a crime.

“I haven’t heard anything about the funeral,” Vitaly Hanchev told the state-run Rossiya-24 TV channel.
Moscow faced new outrage from the West after the discovery of the mass funeral.
But Mr Putin remained steadfast, saying his war against Russia’s western-leaning neighbor was going according to plan.
“The plan is not subject to adjustment,” Putin said on Friday.

“Our offensive actions do not stop in Donbas itself. They are moving at a slow pace… The Russian army is occupying new and new territories.”

The EU president on Saturday called for an international war crimes tribunal after new mass graves were discovered in Ukraine.
“In the 21st century, such attacks on the civilian population are unimaginable and disgusting,” said Jan Lipavsky, Minister of Foreign Affairs of the Czech Republic, which presides over the European Union.
“We should not lose sight of that. We stand for the punishment of all war criminals,” he added in a message on Twitter.
“I call for the speedy creation of a special international tribunal that will prosecute the crime of aggression.”
French President Emmanuel Macron and US Secretary of State Anthony Blinken joined a growing chorus of outrage in Western countries at reports from Ukrainian officials that they had discovered a mass grave containing hundreds of bodies near the city.
“I condemn in the strongest possible terms the atrocities committed in Izyum, Ukraine, under Russian occupation,” Macron tweeted.
The guilty “will have to answer for their actions. There is no peace without justice,” he added.
Mr Blinken said Russia was behaving “appallingly” and was probably responsible for war crimes.
“This, as scary as it is, is a part of history that continues every time we see the Russian wave retreating from the parts of Ukraine it has occupied,” he said.
“We see what is left after him. And this latest discovery of what appear to be 440 mass graves in Izyum is a reminder of that,” he said, referring to the city in the east of the country where Ukrainian forces drove out Russian invaders.
Mr Blinken urged Ukrainians to preserve evidence to document the atrocities, saying: “There has to be accountability.”

“In many cases, it will amount to war crimes, which I think is an appropriate basis to consider it,” he said.