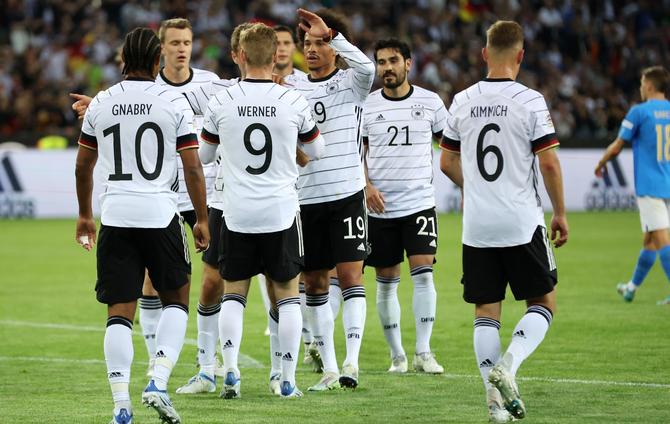 Germany won the first victory in this campaign of the League of Nations, defeating Italy 5: 2 in Monchengladbach.

Joshua Kimmich started the case in the 10th minute, and Germany never looked back. Thomas Mueller scored early in the second half after Ilkay Gundagan scored from the penalty spot.

Tim Werner’s quick double added even more brilliance to the impressive victory when Germany made a statement of intent, despite the consolations of Wilfried Gnont and Alessandro Bastoni.

Germany was out for the first time, and although Giacomo Raspadori had to bring Italy forward during the game, the host took the lead when Kimih found time in the zone to touch the goal.

Gianluigi Donarum could have done better when Kimmich became first, but there was little he could do to prevent Gundogan from doubling Germany’s 12-yard advantage after Bostoni inexplicably pushed Jonas Hoffman into the break.

Donarumma took the ball out of his net again six minutes after the restart. The canopy on the left caused chaos in Italy’s defense when Mueller rebounded, making it 3-0.

Manuel Neuer’s great save by Nicolas Borel was meaningless because of the offside flag, but the grim demonstration continued for his opposite number.

While Donarumme would have had a hard time preventing Werner’s first goal – an attempt at close range from Serge Gnabry’s cute break – he was guilty of a second striker a minute later, playing a horrible pass that was intercepted by Hnabry before being tricked by the next finish.

Neuer gave Donarumme a run for his money with an unusually weak save to give Gnonto his first international goal, while Bastoni headed for extra consolation in overtime, however a humiliating defeat by Italy.