It may have been a successful return to form for David Reynolds, but Grove Racing will be back in action just one event later after a major revamp at Bathurst.

The team worked around the clock for three weeks to get Reynolds’ #26 Ford Mustang ready for the Surfers Paradise round and it worked wonders as the 2013 Gold Coast 600 winner rediscovered his old pace around the 2.96km course.

But the crew will be back in the tools when they return to Victoria after Holdworth was an innocent bystander in a crazy multi-car crash that brought out the red flag on lap 4.

It capped off a tough weekend for the 39-year-old, who bid farewell to the track where he took the podium in 2011.

Holdswart struggled to match his team-mate’s pace and recorded P15 on Saturday, stuck in a train of cars before being stopped on Sunday. 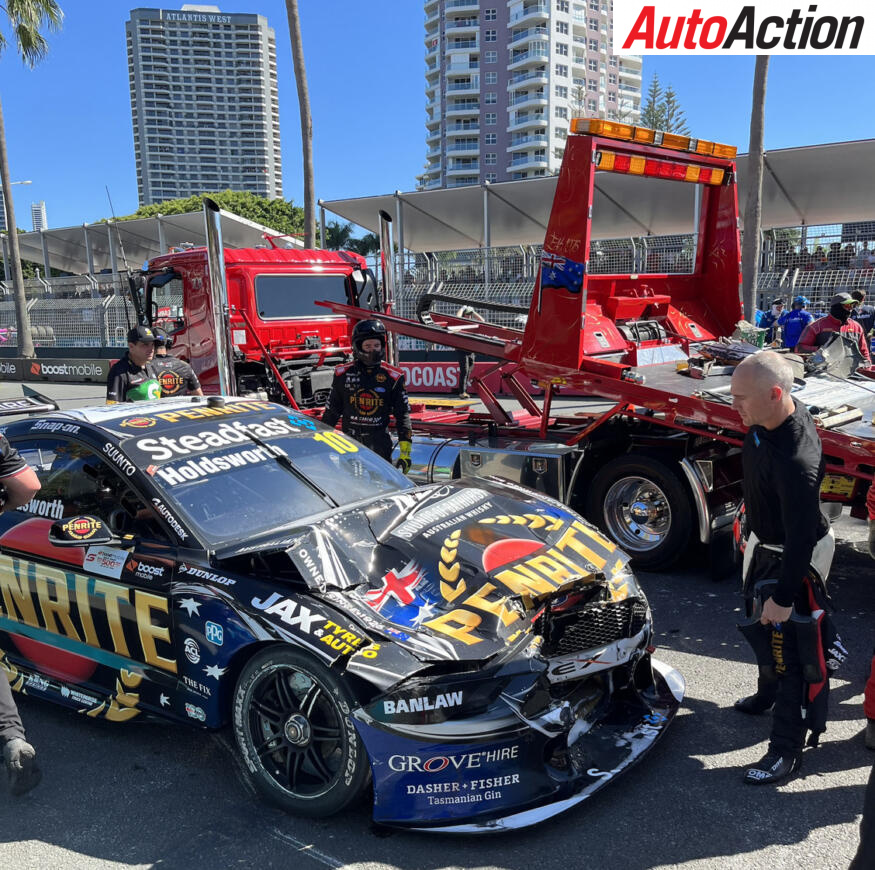 Lee Holdsworth inspects the damage after his race ended on lap 4. Image: Included

He said he could do little but be an innocent part of the incident in a “sad” finish to the weekend and hoped for more success in his farewell race on the streets of Adelaide.

“It’s a sad end to our weekend,” Holdsworth said.

“It was a shame to get into someone else’s incident so early in the race. The previous two laps the group in front had been riding erratically, so I could see it brewing, but when it did, the track was blocked and it did a lot of damage to our car.

“We’ll get it back and ready to go in Adelaide for my final full-time Supercars round.”

It was a costly round as the veteran No.10 dropped one place from 12th to 13th in the championship standings, behind Will Brown

While Holdsworth struggled at the front in Bathurst with the No.26 car retired early after a difficult qualifying, things turned around on the Gold Coast. Reynolds was on fire on Saturday, producing one of the “best laps” of his life to score his third pole on the Gold Coast, in a rare session where Shane van Gisbergen finished second.

Although van Gisbergen had the last laugh to score the winners’ surfboard on Saturday, second place marked a return to form for the No. 26, who landed on the podium for the seventh time in 2022 and first since Winton.

But it came at a price: Reynolds was clearly exhausted after sprinting 85 laps around the concrete canyon.

However, the struggle in the cockpit was worth it as another top four finish in race two capped off a strong weekend, taking him to seventh in the championship, his highest since Darwin.

Reynolds’ pain has been worth it as the trophy will inspire Grove Racing’s next major revamp ahead of the final VALO Adelaide 500 season.