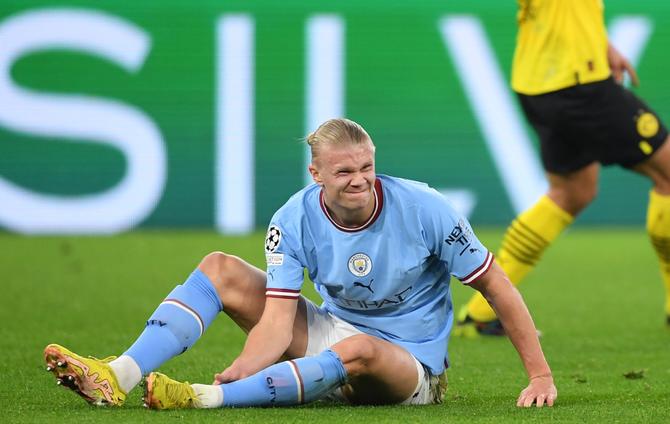 City were held to a 0-0 draw at Signal Iduna Park on Wednesday, with Haaland sent off at half-time after an uncharacteristically quiet first half.

Pep Guardiola confirmed after the match that the Norway striker – and Joao Cancelo, who was also brought off at half-time – had been battling a minor illness ahead of the game.

Haaland also picked up a knock on his leg, although Guardiola did not suggest his condition was a major concern and the striker looked cheerful as he welcomed his former Dortmund team-mates onto the pitch at full-time.

“Erling didn’t feel well, he had a little temperature before the game, Joao too,” Guardiola said.

“[Haaland] there was a knock in the legs. So we changed him, and during that period we struggled a lot.”

The draw was enough for City to secure progress as Group G winners, while Dortmund also confirmed qualification for the last 16.

However, City should have walked away with all three points.

Riyad Mahrez won a penalty in the second half after a clumsy foul on Emre Can, but his resulting spot-kick was saved by Gregor Kobel.

It was the 25th time City have failed to convert a penalty since Guardiola took over in 2016 (out of a possible 80), more than any other Premier League team in the same period.

“Of course, this is a problem. Since I’m here, it’s 24 or 25 penalties. [missed]most of them are in the Champions League,” Guardiola said.

“It’s too much. I always admire courage, responsibility [to take a penalty]but of course we miss a lot and that’s a problem.

“Otherwise we have to improve those small details, those margins in this competition, that’s the difference [between success and failure].”

It was also Mahrez’s third missed penalty in his last four attempts, although Guardiola is not going to stop him from taking spot-kicks in the future.

“I admire courage. Riyad, with the last penalties, scored a lot of points last season in important moments, so in this situation I admire the courage,” he added.

“When he feels [able] the next time he has a penalty, he will take it. But of course we have to improve.”