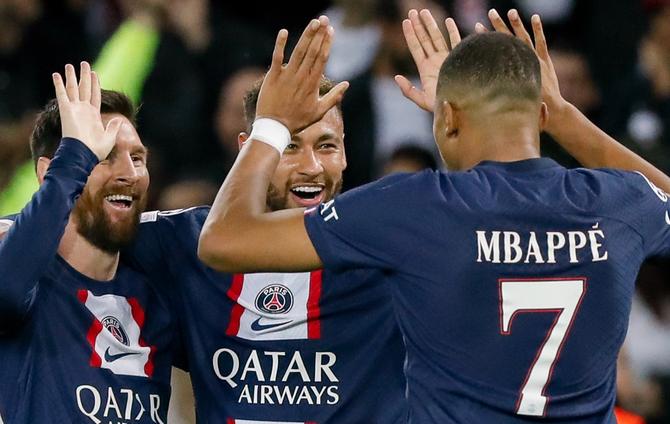 With Neymar operating just behind Mbappe and Messi, all three were on target as Christophe Gaultier’s side soared into the knockout stages with a 7-2 win over Maccabi Haifa at the Parc des Princes.

Supported by a midfield trio of Fabian Ruiz, Renato Sanchez and Vitinho, the front three took advantage of the opportunity to express themselves more freely as PSG scored seven goals in just their third Champions League game.

“We played a good game, we fulfilled the goal of qualification,” Hakimi said. “We scored a lot of goals, the coach chose a system to try.

“The coach likes to play with this midfield, we hope it’s a good opportunity for the team. If the front three stays like this, big things can be done. We are glad that they all scored.”

Gaultier said: “It would be pretentious to think we have the best team in the world. There are high quality teams in this competition.

“But I have three extraordinary players ahead of me. It was necessary to find a system so that they could express themselves more freely.

“Everyone knows the technical quality of those three, but we also understand that in this competition, the denser defense allows us to have transitions. It’s great to see them playing for each other.”

While Gaultier was disappointed with the way the second goal was scored, he was impressed with the overall performance of his players, who he is calling on to top Group H when they face Juventus next week.

“I regret the second goal. We didn’t have enough demandingness and rigor at the beginning of the second half to revive the team,” the head coach added.

“Other than that, I’m happy with the game. The team as a whole was fantastic. We played lively, lively football, with a lot of technical relationships and communication between the lines. I’m happy.

“We qualified; it’s very good, that’s the most important thing. The competition is not over, we have to go first against Juventus. PSG’s ambition is to finish first. We remain focused on that goal.”