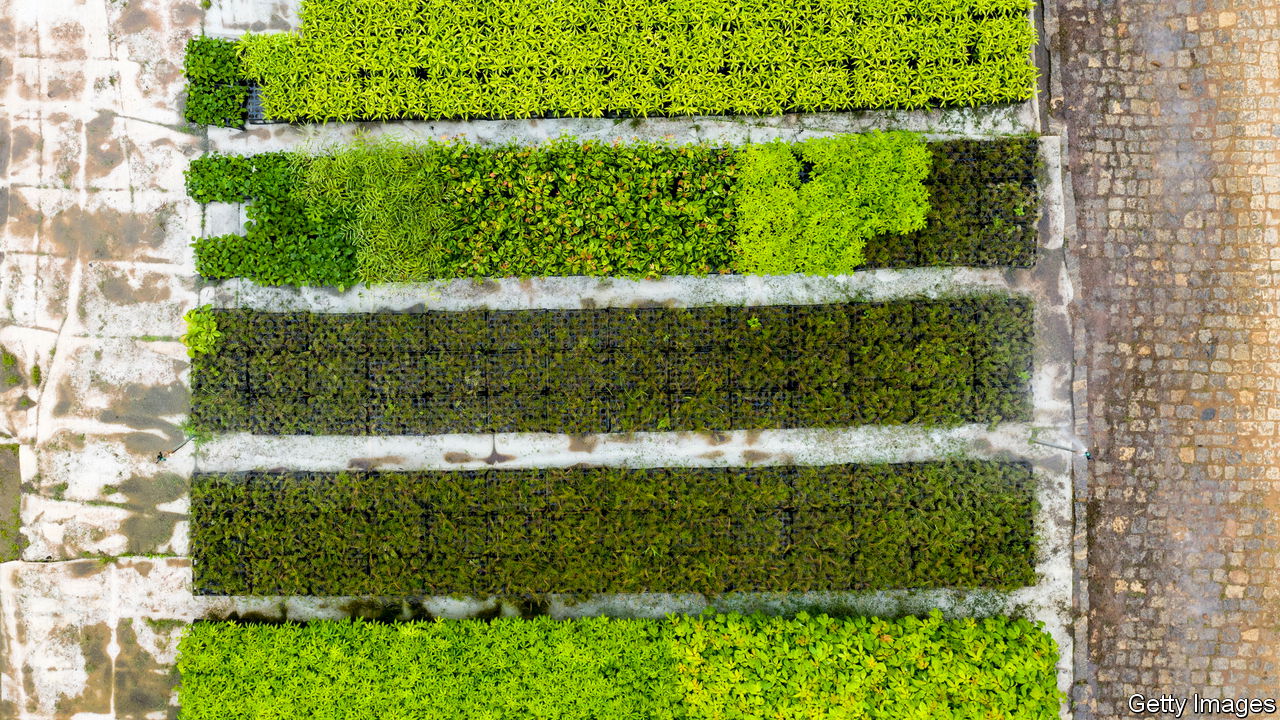 World leaders may be failing to shut down coal-fired power plants or raise gasoline prices, but they can be relied upon to embrace one ally in the fight against climate change: wood. Despite all his claims that climate change was a hoax, even Donald Trump, as president, advocated the initiative to plant a trillion trees. So there is reason to be skeptical about the pact announced at this week’s Glasgow climate summit to end deforestation by the end of the decade.

The world has seen similar optional declarations before. In 2014, governments, companies and NGOs pledged to halve deforestation by 2020 and end it by 2030, according to the New York Declaration on Forests. The first goal was missed, the second seems to be a stretch. And these trillions of trees remain an achievement of mostly alliteration. However, this week’s ads have improved significantly compared to previous efforts.

This time Brazil and Indonesia signed (although India did not sign). States have pledged to raise money for the protection and restoration of forests, including in the Congo Basin, and have recognized that indigenous peoples can best care for the forests in which they live. At least as significant is the commitment by the private sector, including major financial institutions, to eradicate deforestation from their supply chains and portfolios.

Forests serve as carbon “absorbers”, producing 7.6 billion tons of carbon dioxide annually. Felling, burning or thinning of trees or other ecosystem degradation accounts for 11% of emissions. Thus, planting and forest protection programs will be important to achieve the goals of the Paris Agreement to limit the growth of world average temperatures from 1.5 ° C to “well below 2 ° C” compared to pre-industrial levels. The text of the Paris Agreement provides a balance between anthropogenic emissions and flows “in the second half of this century.” This has already led to a number of national and corporate strategies to achieve zero emissions through forestry, from restoring carbon-rich peatlands to developing agroforestry.

The problem is that the world lacks a common, reasonable system for estimating the contribution of trees to carbon sequestration. This is an accounting puzzle of great complexity. Depending on whether this is resolved and how, trees can become either part of the solution to global warming or part of the problem.

The agenda of the United Nations conference in Glasgow includes, among other initiatives, accounting techniques and standards, as well as new standards for the carbon market to include prices for protection or tree planting. As the parties to the Paris Agreement see how to achieve their goals, transparency and accountability are on the agenda.

Many countries consider forestry necessary to achieve pure zero. China and India have extensive tree planting programs. Russia wants to take advantage of the fact that it contains 20% of the world’s forests to offset greenhouse gas emissions. Bhutan, one of the few countries that plausibly claims to have reached pure zero, can do so only by taking credit for a large dose of forestry. Myanmar is in a similar situation.

At the heart of the problem is that the natural carbon cycle, in which trees and other plants play an ancient role, fails human activity. The cycle is usually slow and self-regulating. Trees absorb CO2 from the atmosphere and then return some of it when they decompose or burn in natural forest fires. Over time, this CO2 returns to new plants. In the absence of human intervention, carbon sources and absorbers reach balance.

At the same time, the entry of carbon dioxide from fossil fuels into the atmosphere allows plants to work harder, increasing the efficiency of some absorbers. But this is not an unconditional benefit: trees that migrate north to the Arctic Circle due to this “carbon dioxide fertilizer” obscure land that would previously be snowy and white. Dark lands absorb more energy from the sun, intensifying the warming of the polar region.

All these ways of influencing people on forests, and with them on the atmosphere, are devilishly difficult to separate from each other – and from what would happen in their absence. There are some standards and methods. Independent scientists and bean counters of the UN Framework Convention on Climate Change have developed shorthand to help countries measure carbon exhalation and inhalation. In the annual inventories of greenhouse gases that countries represent to the UN, changes in land emissions labeled as “managed” are considered anthropogenic. What falls under the label of “managed” depends on the country; it can include everything from pastures in felled forests to protected forests, which, although not actively managed, will be protected by firefighters when a spark breaks out. Thus, changes in emissions from controlled lands include the natural background carbon cycle, which is not directly affected by human activities.

Myanmar’s industrial emissions make up a small fraction of 52 billion tons of global annual volume, so any fiction won’t matter much. The same cannot be said of Russia, the world’s fourth largest emitter. For years, Russia has viewed its vast forests as central to its efforts against climate change. Russia’s commitment to the Paris targets says that by 2030 it will reduce emissions by 70% compared to 1990 levels, “taking into account the maximum possible absorption capacity of forests and other ecosystems.” In 2019, Russia may claim that its forests have absorbed the equivalent of 25% of its industrial emissions.

This effect is reduced as aging trees absorb less and less CO2. According to Russia’s Ministry of Environment and Natural Resources, the sink will go down to zero – absorbing as much carbon as it emits – in four decades. This was a good thing when last year Russia’s first forest inventory since the mid-1990s found that the volume of forests had increased by 25%. Earlier this year an independent study was published in Nature estimated that this carbon sink was 47% larger than previously thought. Much of the increase is due to natural growth when forests rebuild abandoned farmland, or trees creep north. Such revisions cost hundreds of millions of tons of carbon emissions and should appear in future inventories in Russia.

To add to this windfall, the Russian government recently announced that it would include in its list of greenhouse gases unmanaged “protected” forests along with managed forests. This could immediately improve Russia’s annual, if not climate, reports by helping add hundreds of millions of tons of CO2 to its forest shell.

Common, effective standards for measuring the contribution of trees to national emissions would make it easier to compare the country’s progress towards climate goals. But environmentalists warn that the gap between national greenhouse gas inventories and estimates made by independent scientists makes it impossible. Because official greenhouse gas inventories calculate emissions from “managed” ecosystems, and global climate models use a different method, the two systems give different results. According to climate models, the Earth’s landmass emits 5.5 billion tons more CO2 annually than reserves. None of the calculations are better, the researchers say, but because climate models are used to map pathways to a stable climate, and inventories track progress along those pathways, they compare apples and oranges.

Improved standards will also create a solid foundation for a growing carbon offset market, which is key to deterring the private sector against climate change. For example, activists in Brazil see the global trade in carbon credits under Article 6 of the Paris Agreement as a silver bullet to reduce deforestation, causing about half of the emissions in Brazil. They think the global carbon market will turn forests into a commodity that can be traded, making land in the Amazon more valuable with trees than without.

But in order to be effective in stabilizing the climate, projects that receive carbon credits to stop deforestation or promote reforestation must be able to demonstrate that they are reducing emissions that would otherwise have occurred – in the jargon of carbon offsets. known as additionality. You can, for example, buy carbon compensation to protect trees in the Amazon state of Pará. But the vast majority of land there is already protected by federal authorities, and therefore they should not be considered as a basis for the payment of carbon credits.

When it comes to forests, the carbon offset market now also cannot take into account what is known as maturity. Replacing a diesel bus with an electric one probably removes emissions forever–if lucky, diesel buses will not be left to buy when the electric one runs out–but a piece of forest could be cleared or burned in the next decade, or even next week. How can the market guarantee that the offset purchased today will have a lasting effect? And in Brazil and other countries, programs to restore or plant new forests also face the problem of leakage: protecting one piece of land can simply encourage deforestation elsewhere.

All of these concerns relate to existing voluntary carbon markets. The economy ticket for the flight from London to New York emits about 600 kg of CO2; the offset for this carbon can be purchased for just a few dollars through commercial tree planting schemes. This may ease the conscience of the traveler, but whether to protect the climate is far from known. Over the next two weeks, delegates to COP26 will try to agree on guidelines for permanence and accountability for additionality, hoping to create a model that can be followed in voluntary markets.

It’s all for the best. In fact, there is no poem as beautiful as a tree, and the carbon compensations and forests that they can cause to be planted or protected can help slow down and even stop climate change. But to do this, world leaders will need to demand and much less popular measures such as the cessation of fossil fuels and the transformation of agriculture. Climate models show that ecosystem shells will be most effective at absorbing CO2 if warming remains within Paris targets. As temperatures rise, it appears likely carbon-rich tropical ecosystems will dry up, burn up, and become sources of carbon rather than streams. Trees cannot solve the climate crisis. Only people can.

The latest from COP26 see in our news updates. For more information on climate change, sign up The question of climateour bi-weekly newsletter or visit our climate change center

An earlier version of this article was published online on November 2, 2021