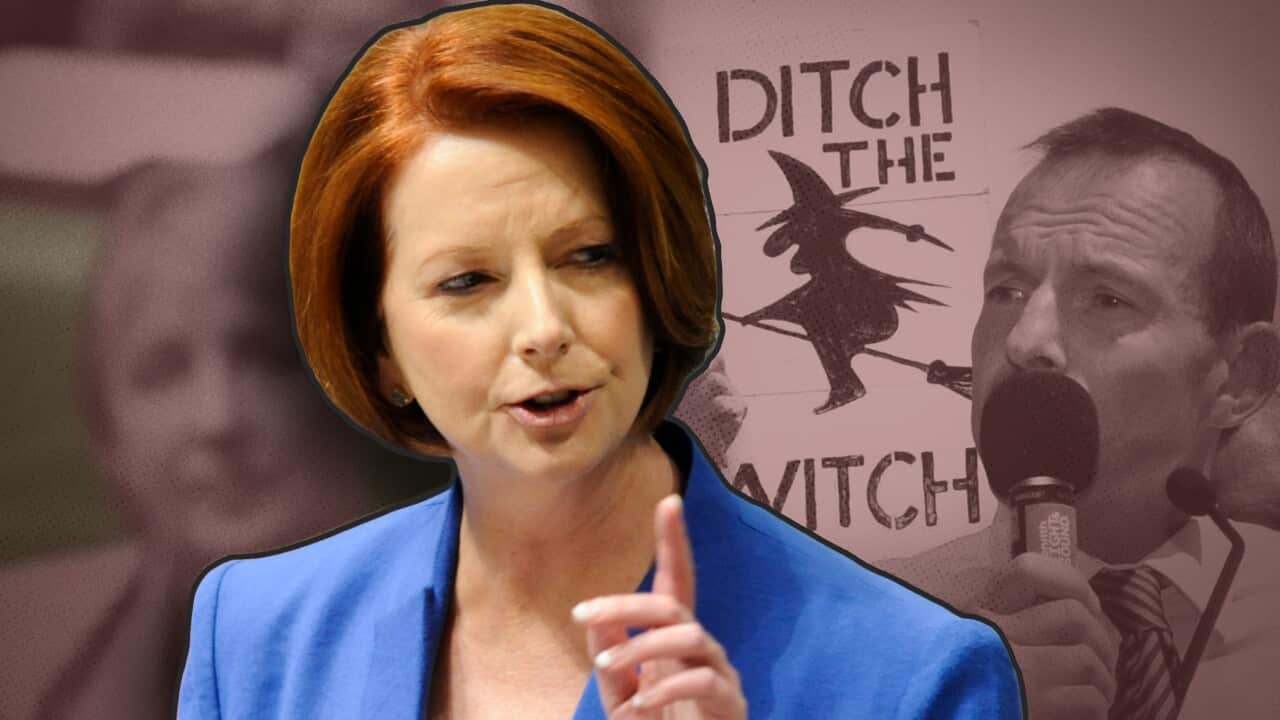 Julia Gillard’s time as Australian prime minister may only have lasted three years but the former Labor leader delivered one of the most memorable moments in Australian political history.
On 9 October 2012, the country’s first female prime minister was under immense pressure to keep her government in power amid scandals and increasingly personal attacks.

Then-opposition leader Tony Abbott had recently been photographed at an anti-carbon tax rally next to placards calling her “Juliar”, “[Greens leader] Bob Brown’s bitch” and reading “Ditch the witch”.

There was a fixation on her wardrobe and a photo showing an , for some a symbol of Ms Gillard’s childlessness.

Ms Gillard later said she wished she had called out sexist media coverage earlier, saying she “didn’t realise it was going to get as mad as it did”. But under pressure in parliament, Ms Gillard addressed the issue in a speech that was voted the “most unforgettable” moment in Australian TV history by a Guardian Australia poll this year.

Ms Gillard said she was initially “confused and amused” by the overwhelming response, including from media around the world, and even resentful her years of parliamentary work had come down to one moment, but has now made peace with it.

“At the end of the day, if it’s the only thing people overseas know about Australian politics — and it often is — it’s a pretty good one thing to know,” she told the Harvard Business Review in 2019.

Who was ‘Slippery Pete’?

The year before, Ms Gillard had managed to convince an Opposition MP, Peter Slipper, to become Speaker of the House of Representatives, which meant one of her own MPs did not need to take the role. That ensured Labor still had enough seats to remain in power.

One reason Mr Slipper, the Queensland MP for Fisher, was eager to betray his own party was because he was on track to lose Liberal preselection of his seat. He was reportedly nicknamed “Slippery Pete” by some in Canberra – a name repeated in the media – due to alleged incidents of drunken behaviour and questions around his use of parliamentary travel entitlements.

Mr Slipper acknowledged: “I’ve made some mistakes, as some of the colourful stories about me reveal,” when he took the role as Speaker, but blamed dental medication rather than being drunk when he was refused permission to board a flight in 2003, and said being thrown out of a Canberra nightclub in 2007 was “entirely unprovoked”. He would go on to win his appeal against a conviction for misusing taxpayer-funded taxi vouchers for non-job-related visits to wineries outside Canberra in 2015.

In the past, Mr Abbott had chosen to continue supporting Mr Slipper but there were now plans to replace him. The Opposition was furious when Mr Slipper defected.
Labor’s arrangement with Mr Slipper began to unravel when staffer James Ashby accused Mr Slipper of sexual harassment. Court proceedings revealed text messages Mr Slipper had sent Mr Ashby which used sexist language. The allegations came to a head on 9 October 2012 – the day of Ms Gillard’s speech – when Mr Abbott demanded Mr Slipper’s resignation as Speaker, a motion that was unsuccessful, although .
The sexual harassment allegation was later found to be politically motivated and thrown out of court. Mr Ashby was successful in appealing that decision which he claimed made “significant findings … that the harassment had in fact occurred.”
Mr Slipper said that suggestion was “wholly incorrect” and the court decision meant only that Mr Ashby could bring his allegations before the court to be tested, but Mr Ashby

Speaking at a Young Liberals dinner in Sydney, Jones said: “Every person in the caucus of the Labor Party knows that Julia Gillard is a liar, everybody. I will come to that in a moment. The old man recently died a few weeks ago of shame. To think that he has a daughter who told lies every time she stood for Parliament,” Jones said.

Ms Gillard later said there was little preparation for the speech but she had been expecting Mr Abbott to talk about sexism that day, so had asked her office to give her his top sexist quotes.
“It wasn’t some thought-through strategy with a wonderfully chiselled speech that we’d been working on for days. It welled up. I got a blank piece of paper and just scribbled down words to help guide me from one point to another,” she told the .

“Looking back, I think it was driven by a deep frustration that after every sexist thing directed at me that I’d bitten my lip on, now I was going to be accused of sexism — the unfairness of that. That anger propelled it.”

While almost all of Australia’s press gallery dismissed Ms Gillard’s speech as a flawed attempt to cling on to power and analysed it from the context of the day’s politics, the speech began to resonate far beyond the parliament’s walls.
It , with feminist website Jezebel calling it “the best thing you’ll see all day”. It headlined its story: “Australia’s Female Prime Minister Rips Misogynist a New One in Epic Speech on Sexism”. Viral news website Buzzfeed broke the speech into a series of animated GIFs, calling it “awesome”.

In the years since, her speech has been cited as an inspiration for many women, including Australian activist and founder of consent and sexuality education movement Teach Us Consent, Chanel Contos. She said she was 14 years old when she first heard the speech and “was in a social situation where it was made clear to my peers and I that women were subordinate to men”.

“The speech really changed the conversation and challenged my perception of what it means to be a woman in society,” Ms Contos told this month.

“The next day at school, everyone was talking about misogyny and what that word meant, so I started to learn from my peers. It’s gut-wrenching now to think about the sexism Julia endured and how we were all complicit.

“I’m still in the process of being able to confidently speak up in situations because so much of my socialisation as a girl has been to be submissive and passive. It’s a lot easier to stand up for other people than yourself, which is why what Julia did was so incredible. Thanks to Julia paving the way, we can now take our turn.”

Years later, women were still expressing gratitude to Ms Gillard for her words. In 2019, Ms Gillard posted a note on Facebook that she had received from a stranger on a flight, thanking her for being “such a strong, intelligent and unapologetic role model for myself and so many of my peers”. She wrote that Ms Gillard had inspired her to move to Canberra and work for the public service.
The woman said when she and her girlfriends felt they were being unfairly sidelined they would ask “WWJD?” or “What Would Julia Do?”.
And even former , a former adviser claimed this year.
In a piece for , political science academic Dr Blair Williams of the Australian National University said the speech had come to define Ms Gillard’s prime ministership and was also part of the pop cultural canon, inspiring young women today to create memes and TikToks paying homage to her famous words.
“Gillard’s misogyny speech and her time as our first woman prime minister changed the way that politics and sexism were talked about in Australia and highlighted the toxic nature of parliament,” Dr Williams wrote.
“Rather than ‘playing the gender card’, Gillard drew attention to it, calling out the sexism and misogyny that many women in politics had to silently endure.”
The speech even led to a change in the definition of “misogynist” in Australia, with the Macquarie Dictionary updating the meaning of the word from “hatred of women” to “entrenched prejudice against women”.
Editor Sue Butler told the ABC the word “misogyny” had not been used to mean “hatred of women” for about the last 20 or 30 years.

“Particularly in feminist language … if you refer to someone as a misogynist in that kind of argument you’re not really saying that they have a pathological sickness … they don’t have this hatred that extends to all women. They merely have an entrenched prejudice against women.”

Dr Williams said Ms Gillard had left a lasting legacy as a role model for girls and young women, not just because of her political career but also for the graceful way she had moved on, continuing her work in education, mental health and women’s leadership.

“Like all politicians, she’ll continue to have her critics, but her post-political life and demeanour has largely been admired,” Dr Williams wrote. “Gillard’s former foe, Abbott, even attended the 2018 unveiling of her official portrait.”