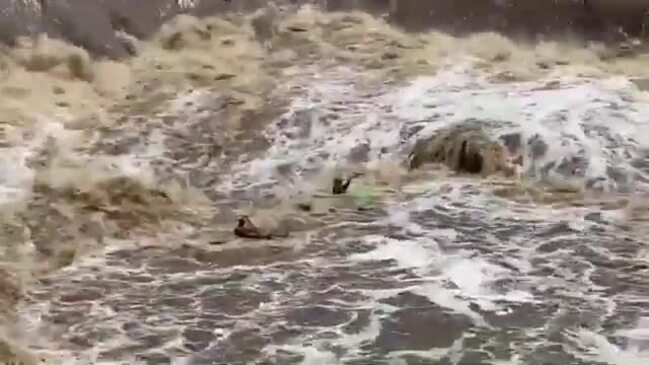 Kayakers navigate the high water at Buckley Falls on the Barwon River in Geelong, Victoria, on Sunday, October 16, after heavy rain caused flooding in the area in previous days. Local media reports that heavy rain since Wednesday has led to rising river levels and flooding in the area. In response, the authorities closed some roads and facilities. The City of Greater Geelong warned residents on Sunday that they would see “significant debris as well as road damage such as potholes” when the flood recedes. About 7,000 sandbags were distributed ahead of the forecast for more rain within a week. Amanda Stewart’s footage shows people kayaking through fast-moving water. Stewart said the video was taken at Buckley Falls in Geelong on Sunday. Buckley Falls is a cascade of rocks in the Barwon River. Local media reports that the water level started to drop on Sunday. Authorities ordered local residents to avoid river water that day. Posted by Amanda Stewart via Storyful