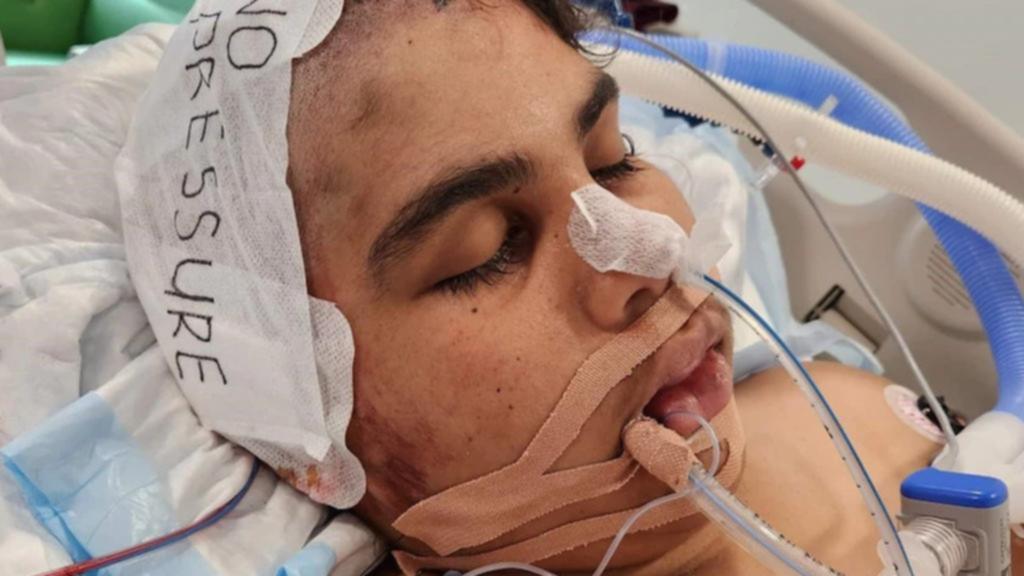 Tributes and donations continue to pour in as a memorial has been erected for a teenager who died after he was believed to have been hit by a metal pole.

Aboriginal schoolboy Cassius Turvey, 15, and his friends had just got off the bus and were walking along Patterson Dr in Middle Swan around 4.30pm on October 13 when a black Ford Ranger allegedly pulled up alongside them.

Police say 21-year-old Jack Steven James Brearley got out of the vehicle and ran toward them, allegedly hitting Cassius with a pole.

Cassius suffered serious head injuries, a seizure and two strokes, eventually ending up in an induced coma before he died on Sunday.

A memorial to Cassius has since been erected in Middle Swan, his family revealed.

According to the boy’s family, the accused mistakenly believed that Kasiy was responsible for breaking windows in the neighborhood.

Police Commissioner Colonel Blanch said in a statement Wednesday night that his thoughts are with the family at this terrible time.

“The investigation into Cassius’ death is ongoing and homicide detectives are building a picture of the circumstances that led to the attack,” he said.

“At this stage it appears that Cassius was an innocent victim of a violent attack. He was just hanging out with his friends when he was attacked.

“I urge members of the community to refrain from making unfounded assumptions regarding this tragic loss of a young boy who was a much-loved family member and friend.

“The process of justice must take its course, as must the ongoing investigation.”

“Very sad…I feel so bad for this little boy’s family; he looked like a beautiful little boy,” he told reporters Thursday.

“They’re going through a lot and it’s really unimaginable.

“I’m just urging everyone to let the law work.”

Mr McGowan also urged people not to speculate about the incident.

“It’s in the courts, the courts will decide these things,” he said.

“You don’t want to interfere with these things. You’ve seen things happening in the east today where people say or do things they shouldn’t and courts are canceled.

“I’m not going to do that, so I’m just going to say, beautiful child, terrible tragedy, grieving family, let the law take its course.”

“By all accounts, Cassius was a wonderful boy. I can’t imagine what his mother and family are going through,” he told reporters.

Meanwhile, tributes to the teenager continued to pour in.

One relative wrote on social media that he did not know how to cope with his loss.

“I keep my kids a little longer. I remember when you were a child until you became a lovely young man,” they wrote.

“You gave everything and anything; there was no shame in your being.

“I remember driving you to school a few times, packing your lunch – there were always Vegemite sandwiches and you always wanted them spread around the edges of the cake.

“You loved to dance and make people laugh. It was contagious.”

More than $293,000 has been raised so far through the family’s GoFundMe page.

Strangers also shared tributes to the boy along with their donations.

“I lost my eldest son in a bicycle accident. No amount of money can compensate for the loss of a child. I am so sorry for your loss,” one person wrote.

In a statement Wednesday, the boy’s mother, Mechel Turvey, said she was “absolutely heartbroken.”

“There are no words that can describe the unimaginable pain of losing a son,” she said.

“He should still be with us today, going to school, playing footy and living a long life.”

Mr Brearley was initially charged with unlawful wounding, but the charge was later upgraded to murder.

He next faces Stirling Gardens Magistrates’ Court on November 9.

Police said Monday they had not yet located the pole and urged anyone with information to come forward.

It is not yet known if police have found the pole.

Mr Brearley’s girlfriend is said to have run the utility and has been questioned by police.

Several other people were also questioned during the investigation, but no further charges were filed.