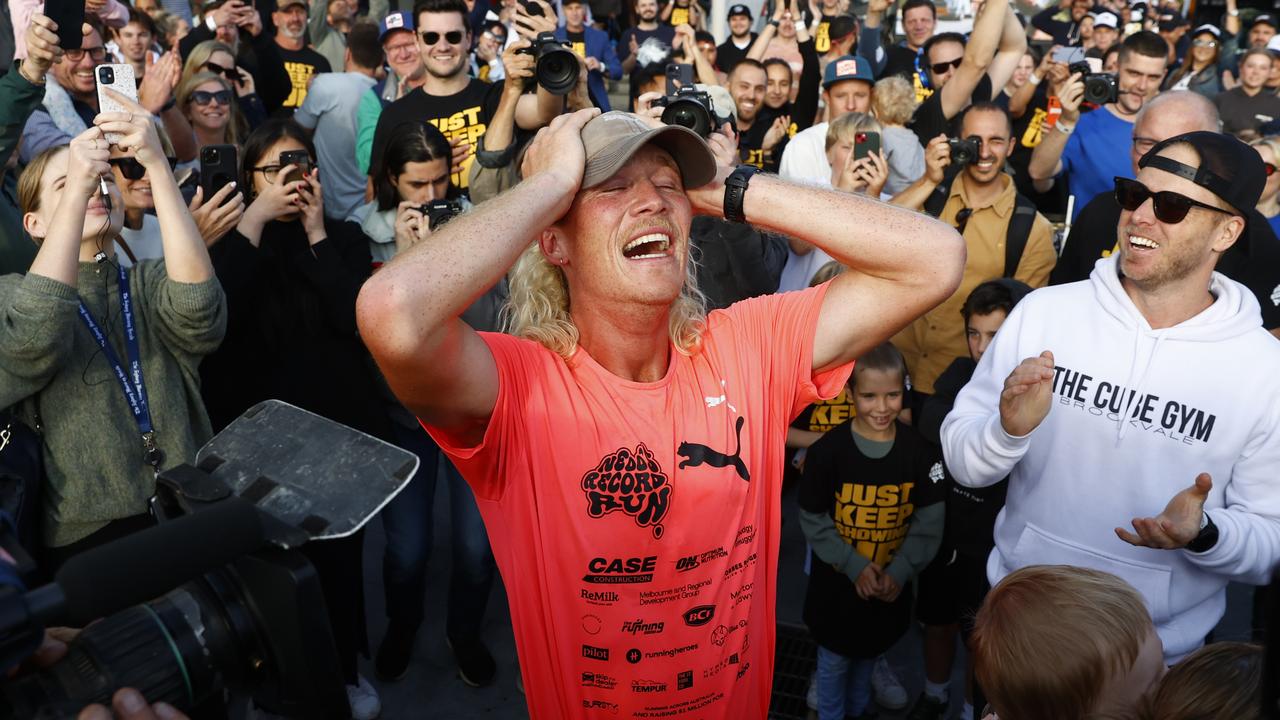 Ned Brockman was given a hero’s welcome on Sydney’s Bondi Beach after completing his mammoth run from one side of Australia to the other.

The 23-year-old ran from Cottesloe Beach in Perth to Bondi — 3800 km journey in 46 days entirely in the name of charity.

Stream over 50 sports live and on demand with Kayo. New to Kayo? Start your free trial now>

It has raised more than $1.3 million for Mobilise, a homeless charity with over 20,000 members.

Brockmann arrived in Bondi around 5.30pm AEDT on Monday as thousands lined the streets to cheer him home.

He was given a traditional indigenous ceremony before having to endure the torture of climbing a ladder to address the crowd.

Brockman thanked everyone for their support and celebrated by drinking a bottle of champagne. went up.

Australians everywhere are praising his epic efforts in running for charity, and there are already calls for Brockman to be named the next Australian of the Year.

Brockmann set off from Perth’s Cottesloe Beach on September 1 and has since averaged more than 80 kilometers a day.

He ran for about 10 hours every day, starting at 5 in the morning. During his 46-day journey, he jogged the equivalent of more than 270 City2Surf races.

Brockman was accompanied by his parents, Kylie and Ian Brockman, girlfriend Gemma Griffin, friend and photographer Bradley Farley, and his physical therapist.

“He needs to get off his feet pretty quickly because they’re pretty broken by this point,” Kylie said. The sun is the herald.

“He’s holding up incredibly well. He’s very skinny and I wish he was a little stockier, but he still runs. I’m surprised.”

Brockmann had originally hoped to break the all-time record set by German ultramarathoner Achim Heukemes in 2005 when he completed the journey across Australia in 43 days.

But after the injury on about day 12, he had to cut back on his run to recover.

A severely swollen ankle left him unable to lift his leg or wiggle his toes.

“We strapped it like a bugger and I ran 100km pretty late at night,” he wrote on Instagram.

The scan revealed a serious overuse injury and the recommended course of action was to not move the injured part for six weeks. But Brockman opted for cortisone shots and kept running.

Things got worse from there as his feet received such punishment, the blisters filled with pus and he had worms living on his leg.

It wasn’t just about the lower body as the biceps couldn’t straighten out because they were stuck running for so long.

In 2020, Brockman achieved the remarkable feat of running 50 marathons in 50 consecutive days, raising over $100,000 for the Australian Red Cross.

You can donate to Brockman’s cause here.