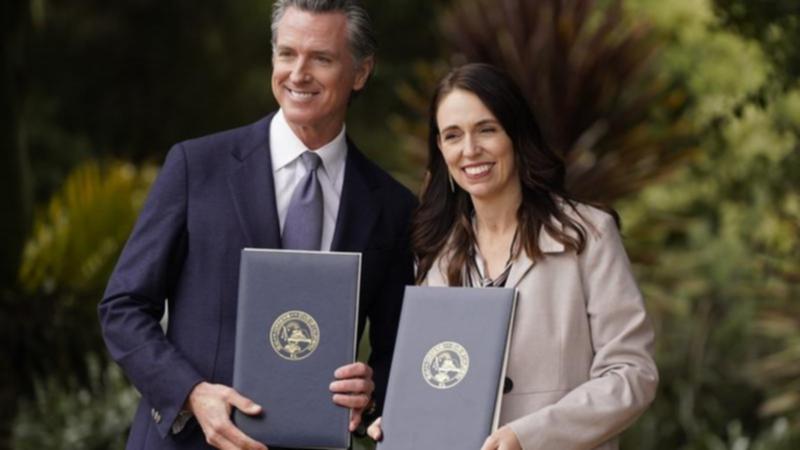 New Zealand and the US state of California have signed a commitment to help fight climate change by sharing ideas and best practices, including on how to put millions of electric vehicles on the road.

The agreement does not bind any of the governments to a specific policy, but outlines broad areas of cooperation.

“We have a natural connection, and I am very glad that today we have confirmed this and will continue to work together on one of the great problems of our generation,” Ardern said.

Cars, trucks and other parts of the transportation sector are the largest contributors to greenhouse gas emissions in California and the second largest in New Zealand after agriculture, Ardern said.

California is moving to a ban on the sale of new gas-powered cars in the state until 2035. New Zealand wants 30 percent of all car sales to be electric by this year.

Newsom said he expects competition to grow in the electric vehicle market, where Tesla currently dominates, comparing it to when Netflix began to face competition from other streaming services.

Ardern said her government would talk to California officials about programs that encourage people to get rid of old cars that consume gas.

New Zealand is home to five million people compared to California’s population of 39 million and has a much smaller economy but both are experiencing the effects of climate change.

The U.S. state has just recorded the driest winter in history amid intensifying droughts, while last winter in New Zealand was the hottest in history.

California is also home to large-scale agriculture. The agreement states that the governments of the two countries can participate in joint projects to expand agricultural practices that strengthen soil health, reduce methane emissions and increase water efficiency.

The memorandum of cooperation was signed by the Consul General of New Zealand in Los Angeles Jeremy Clark-Watson and the Secretary of the California Environmental Protection Agency Jared Blumenfeld.

At last year’s Global Climate Change Conference in Scotland, California signed a brief joint declaration with New Zealand and the Canadian province of Quebec on the exchange of information on climate policy, including carbon markets.

Due to Ardern’s high-profile role in the massacre of 51 believers in two mosques in Christchurch in 2019, the issue of gun control was also expected.

Newsom is pressuring the state legislature to send him a package of gun reform bills in connection with the killing this week of 19 children and two teachers at a Texas elementary school.

Less than a month after the Christchurch shooting, New Zealand’s parliament voted to ban most automatic and semi-automatic weapons.

Newsom and Ardern have not publicly discussed gun control, although Ardern has called for her country’s actions on the issue in response to a question of “common values” between California and New Zealand.

“It was clear that the New Zealand public expected its politicians to find solutions quickly and easily,” Ardern said.

“Are they the answer to all our questions regarding weapons in New Zealand? No. But these were practical steps that we believe were necessary and they could change the situation. And so we did them.”