Last week, the U.S. dollar felt volatile when all eyes were on the Federal Reserve. The central bank has delivered by raising benchmark lending rates by 50 basis points. The initial reaction was the industry boost when Fed Chairman Jerome Powell lowered expectations of a rate hike by 75 basis points, which markets speculated about in the following months. As a result, the dollar became lower.

As traders digested the information, sentiment reversed and the US dollar recovered. After all, quantitative tightening is not far off. The diagram below shows what this might look like. Starting at the initial pace USD 47.5 billion a month in June, accelerating to 95b 3 months later, the balance sheet size will still be higher than Covid’s mid-2024 growth.

Next week, the US dollar will follow the next report on inflation in the US on May 11th. Core inflation is expected to cool to 8.1% y / y in April from 8.5% earlier. The core CPI is expected to be 6.1% from 6.5% previously. Although this will represent some disinflation, it remains well above the central bank’s target. A stronger report could push the US dollar even further and increase risk aversion.

Interestingly, looking at Citi’s economic surprise index, U.S. data still tends to exceed economists ’expectations. However, the margin of fun results relative to estimates was declining. April was a maximum of 70 before falling to 18 before the report on wages in non-agricultural areas. Values ​​below 0 will represent softer results compared to consensus.

The Fedspeak set will also cross wires. Among them are Loretta Mester, Rafael Bostik and John Williams, presidents of offices in Cleveland, Atlanta and New York respectively. To some extent, they could give confidence that the economy will be able to withstand the aggressive tightening of monetary policy. This could offer a quick easing of sentiment, possibly threatening the US dollar.

However, given all things, the dollar still remains able to continue to capitalize against its major counterparts. The central bank remains perhaps the most hawk among its G-10 counterparts. Meanwhile, stagnant balance remains an obstacle to a significant change in sentiment. So this is a bullish call for the world reserve currency next week. 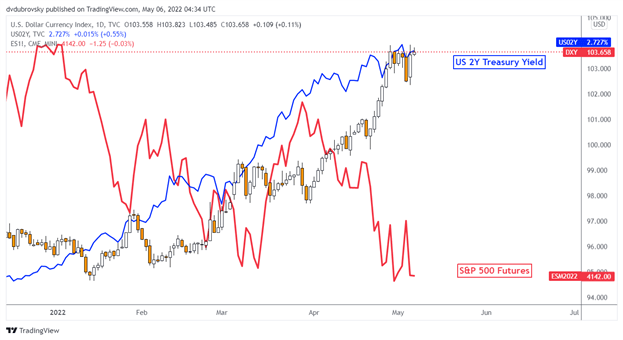