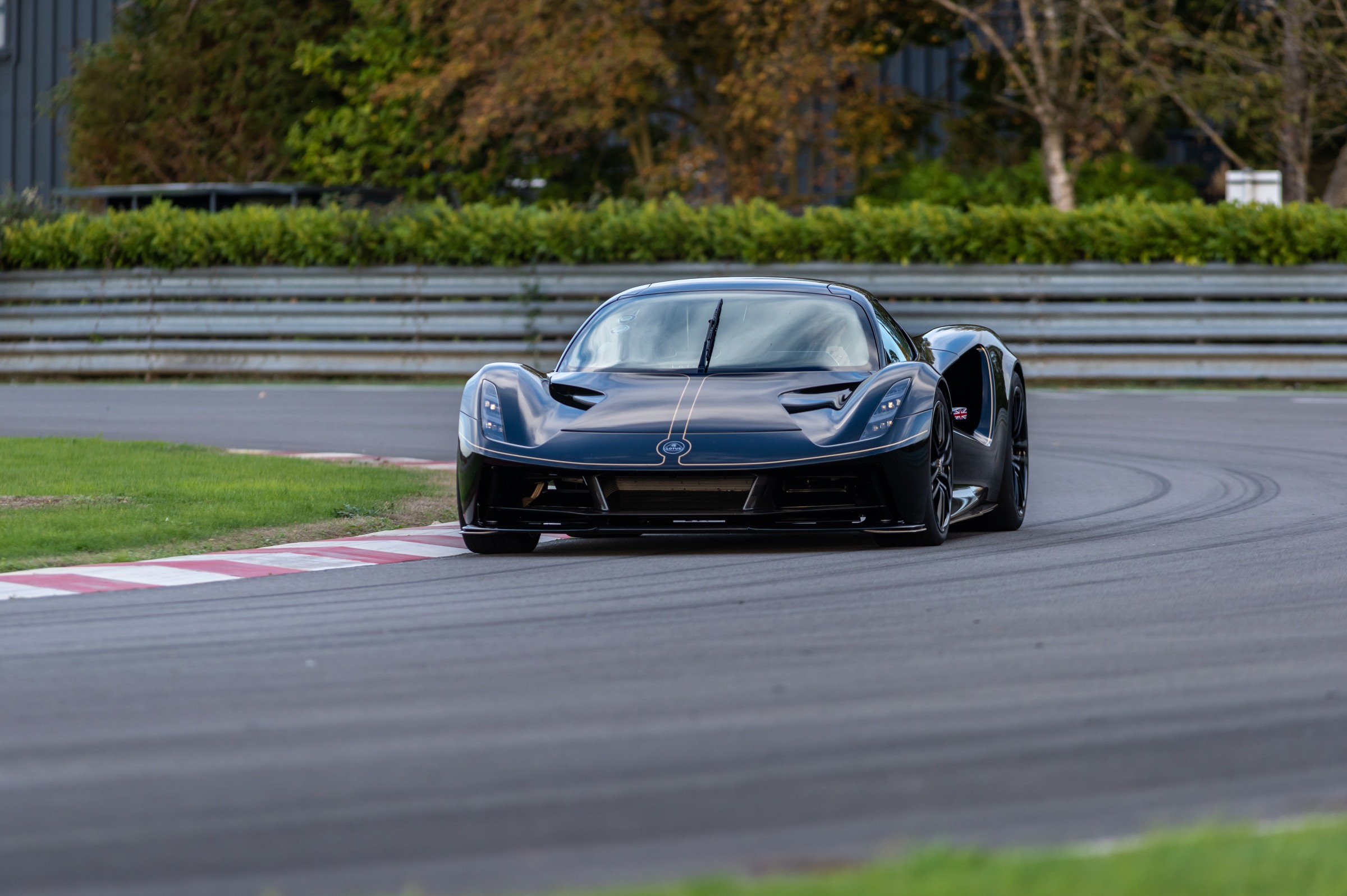 Lotus has unveiled Evija Fittipaldi, a tribute to one of the greatest car-driver pairings Formula 1 has ever seen.

The most powerful production car in the world is stunning Hypercar Lotus Evija – now provides even more exclusivity and desirability. Inspired by the past to improve the future, Lotus has unveiled the Evija Fittipaldi, a tribute to one of the greatest car-driver combinations Formula 1 has ever seen.

That driver is, of course, Emerson Fittipaldi, a young Brazilian driver who joined Lotus and became a legend, cementing his place in Formula 1 history in 1972. Driving the now iconic Lotus Type 72 and winning five of the season’s 11 races, Fittipaldi secured the drivers’ and constructors’ championships for the Lotus team.

Exactly 50 years later, Lotus Evija Fittipaldi is a worthy celebration of this partnership. Just eight examples of the all-electric two-seater are being built by hand at Hethel in Norfolk, UK – Lotus’ global sports car design and manufacturing headquarters – and all have been sold. Deliveries to customers will begin early next year. It’s the latest project from Lotus Advanced Performance, the design and experience division launched earlier this year.

Showcasing the world-renowned black and gold color scheme – which also turns 50 in 2022 – the hand-painted exterior and many other unique design elements have been created to celebrate this amazing collaboration. These include a hand-painted Type 72 overhead view etched into the open carbon fiber roof and a signature Fittipaldi graphic hand-stitched onto the dashboard.

And perhaps the most emotional detail of all is the rotating dial on the floating center instrument panel. It has been handcrafted from recycled original Type 72 aluminium, ensuring that an authentic piece of the iconic F1 driver is part of every Evija Fittipaldi.

Such a special car deserved a special world premiere; customers, their families and other VIP guests attended an exclusive, one-of-a-kind day at Hethel to celebrate the launch of the new car and the iconic Type 72.

Guest of honor was Emerson Fittipaldi himself, who said: “It’s fantastic to be back at Hethel for such a special occasion. I really enjoyed being part of this project and it was a wonderful experience to introduce the car to some of the new owners. Having the opportunity to drive both Evija Fittipaldi and my Type 72 Formula 1 championship car on the Hethel test track was an incredible experience.”

Other highlights of the day included that, for the first time ever, all eight surviving Type 72s – hence the number of Evija cars produced – were brought together in one place and launched on the Hethel test track.

Simon Lane, director of Lotus Advanced Performance, commented: “The word ‘legend’ is often misused, but this project brought together Emerson Fittipaldi’s Lotus Evija hypercar, the Type 72 racing car and our brand’s illustrious F1 heritage. No arguments, these are four legitimate legends, all collaborating to create a truly unique hypercar and a world premiere that was a real “pinch yourself” moment.

He added: “Production of the Evija began in Hethel and these eight cars are a special celebration of this important moment in our history.” 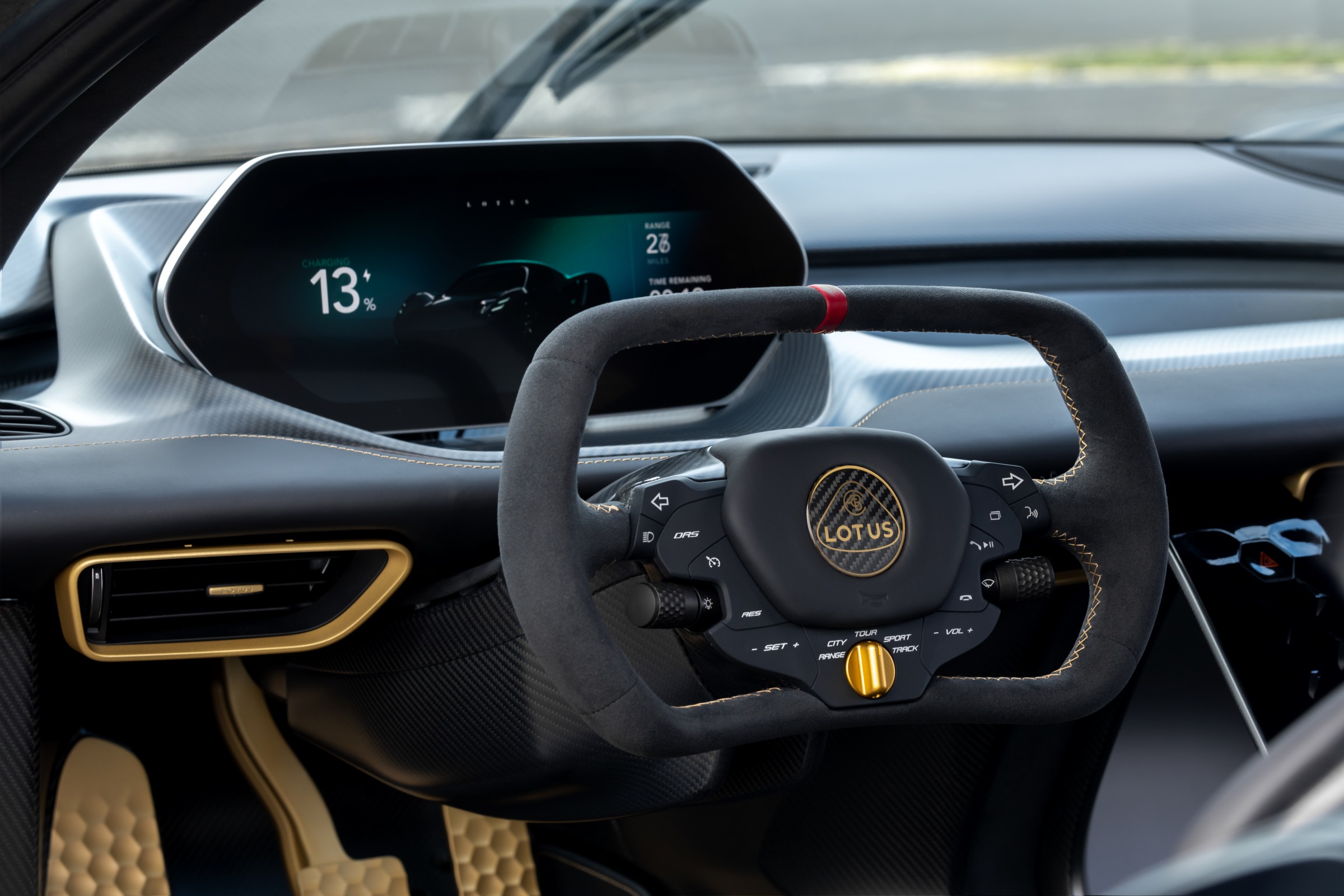 Made to order Lotus Evija Fittipaldi

The individual characteristics of the Lotus Evija Fittipaldi begin with its unique livery, which includes its designation written on the body in golden letters on the side of the rear window. Complementing it are black and gold Type 72 rims complete with anodized center lock surrounds – red on the left side of the car and green on the right, as well as black and gold brake calipers.

Stickers commemorating the Type 72’s 1972 race wins are located on the active rear wing and the number 8 is applied to the B-pillar. Fittipaldi raced this number on his car during the 1972 season, including a Grand Prix win – under Great Britain. Finishing off the exterior styling is a carbon and gold Lotus nose badge.

The interior continues the theme of luxury and individual design. A black leather interior with gold contrast stitching can be found throughout the cabin, as well as exclusive stitching on the roof lining, as well as gold trim on the air vents, center rotary disc, start/stop button and pedals.

The car was developed with the generous support of Classic Team Lotus, the historic motorsport business that is today run by the family of Lotus founder Colin Chapman to service and operate Lotus F1 cars. He is also based in Hetel across the street from Lotus and hosted a gala dinner during the launch.

Clive Chapman, managing director, commented: “Emerson Fittipaldi and my father had a very special relationship and their impressive success was down to the brilliant teamwork of the dedicated designers and mechanics at Team Lotus. One of motorsport’s most respected drivers, it’s always emotional when Emerson is reunited with the Lotus Type 72, which he describes as the greatest car he’s ever raced.’ 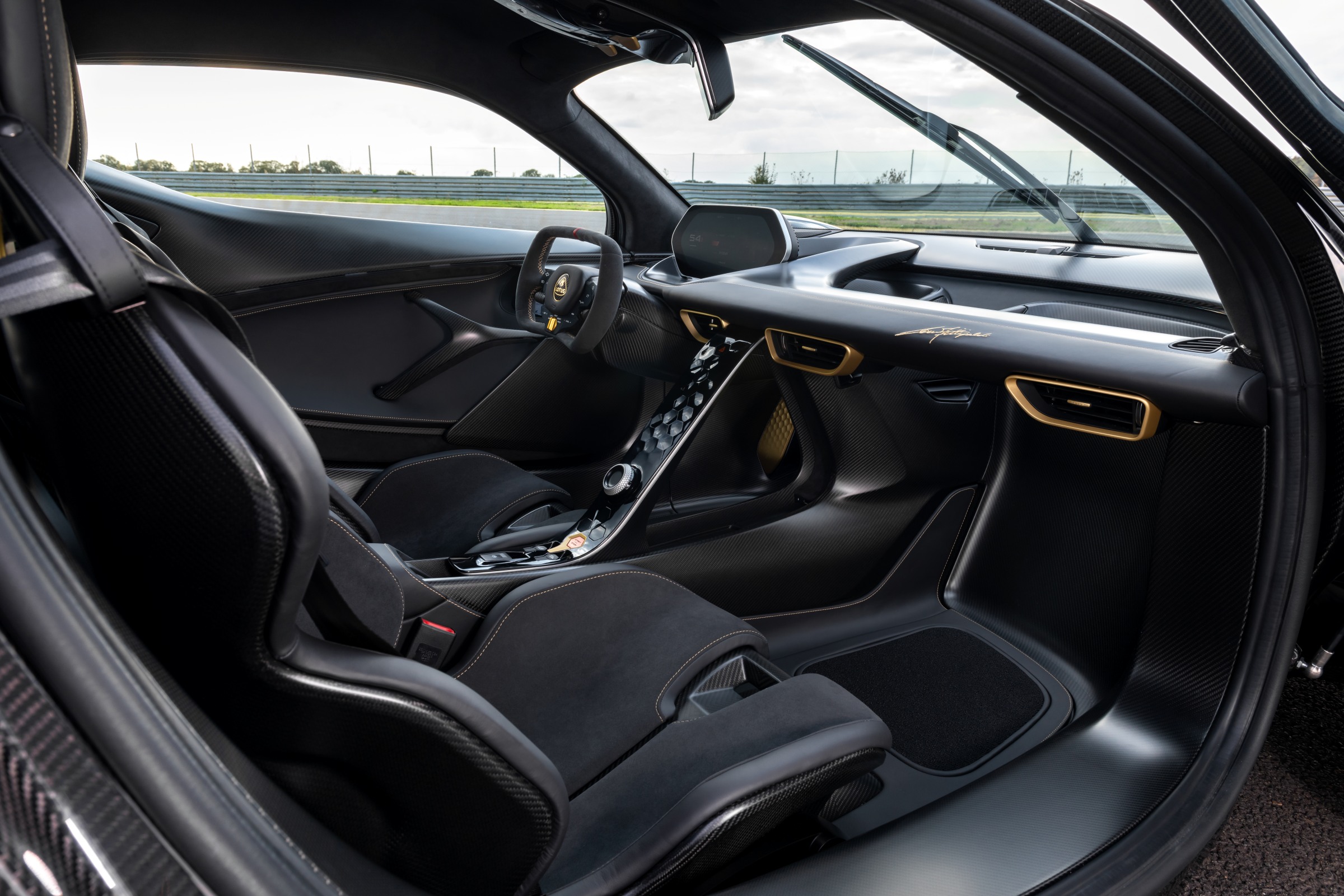 Despite the incredible power and performance, the driver remains at the heart of the Lotus Evija experience, just as it was for the Emerson Fittipaldi and Type 72. The specifications and performance figures of the Lotus Evija Fittipaldi are truly impressive; more than 2,000 PS makes it the most powerful production car in the world, generating more than 1,700 Nm of torque. Acceleration from 0-100 km/h takes less than three seconds and 0-300 km/h takes nine seconds from standstill. The limited top speed is 217 mph (350 km/h). Full specifications are detailed in the table below.

From one world champion to another, Jenson Button visited Lotus earlier in the week to test drive the Evija and Emerson’s Type 72 at the famous Hethel test track. It was the first time Jenson had seen the Evija in production and took one to the track to shake it up before launching the Evija Fittipaldi. Quickly up to speed, Jenson drove the car around a 2.2-mile test track, testing the car’s ride, handling and performance. He has also been seen flashing power in several standup starts. Full of praise as he jumped out of the driver’s seat of the world’s most powerful production car. Jenson commented, “That sounds like a jet engine! You think an electric car is quiet, but it’s not. The torque is astronomical. It’s amazing, it puts a big smile on your face. It’s spaceship-like, the handling and steering definitely make it clear you’re driving a Lotus; I am amazed at his dexterity. This is the Lotus of the future and I can’t wait to drive my own Evija.”

Jenson also got the chance to turn back the clock and ride Emerson’s 1972 Lotus Type 72. The car that helped Emerson win his first championship title. Jenson Button added: “It’s great to immerse yourself in racing history. There is not much space, but everything is in the right position. It was easy on the heel and toe. It’s a real privilege to drive such a special car.” 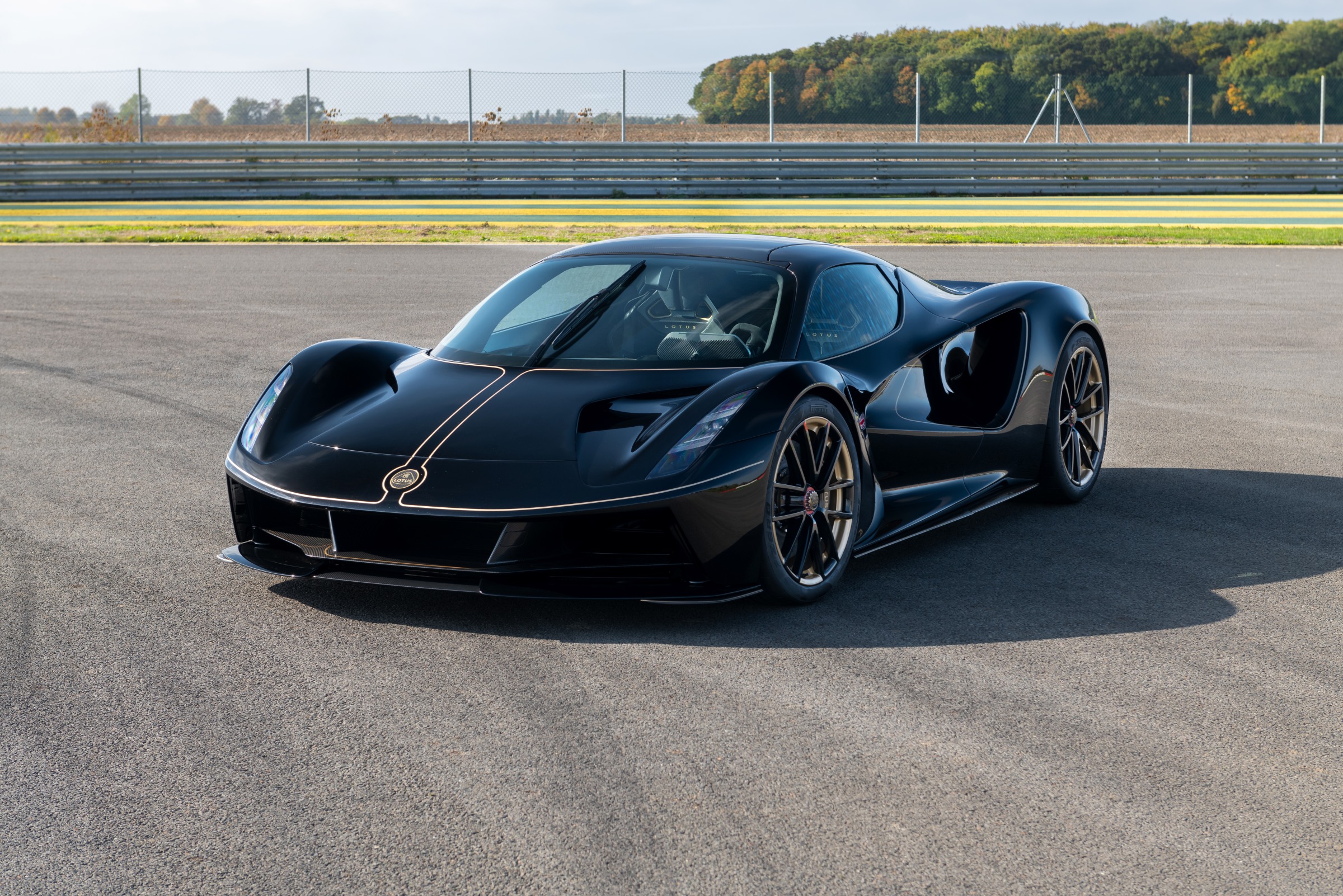 A stunning piece of modern automotive design – the work of a team led by Lotus design director Russell Carr – the Evija features a spectacular venturi tunnel through each rear end, giving it a truly breathtaking look. This ‘porosity’ means optimized airflow as air is directed not only over, under and around the Evija, but also through it, maximizing downforce while minimizing drag. Its front splitter promotes traction by directing cooling air to the battery, electronic motors and brakes, while active aerodynamic features such as Formula 1-style DRS (Drag Reduction System) give the Evija state-of-the-art performance. With driving dynamics controlled by the team of Havan Kershaw, Lotus’s world-renowned Director of Automotive Attributes, the Evija is a car like no other.

The first Lotus road car to feature a one-piece carbon fiber monocoque chassis, the interior, from the fully adjustable racing-style seats to the multifunction steering wheel, is the pinnacle of motorsport-inspired road car design and technology. 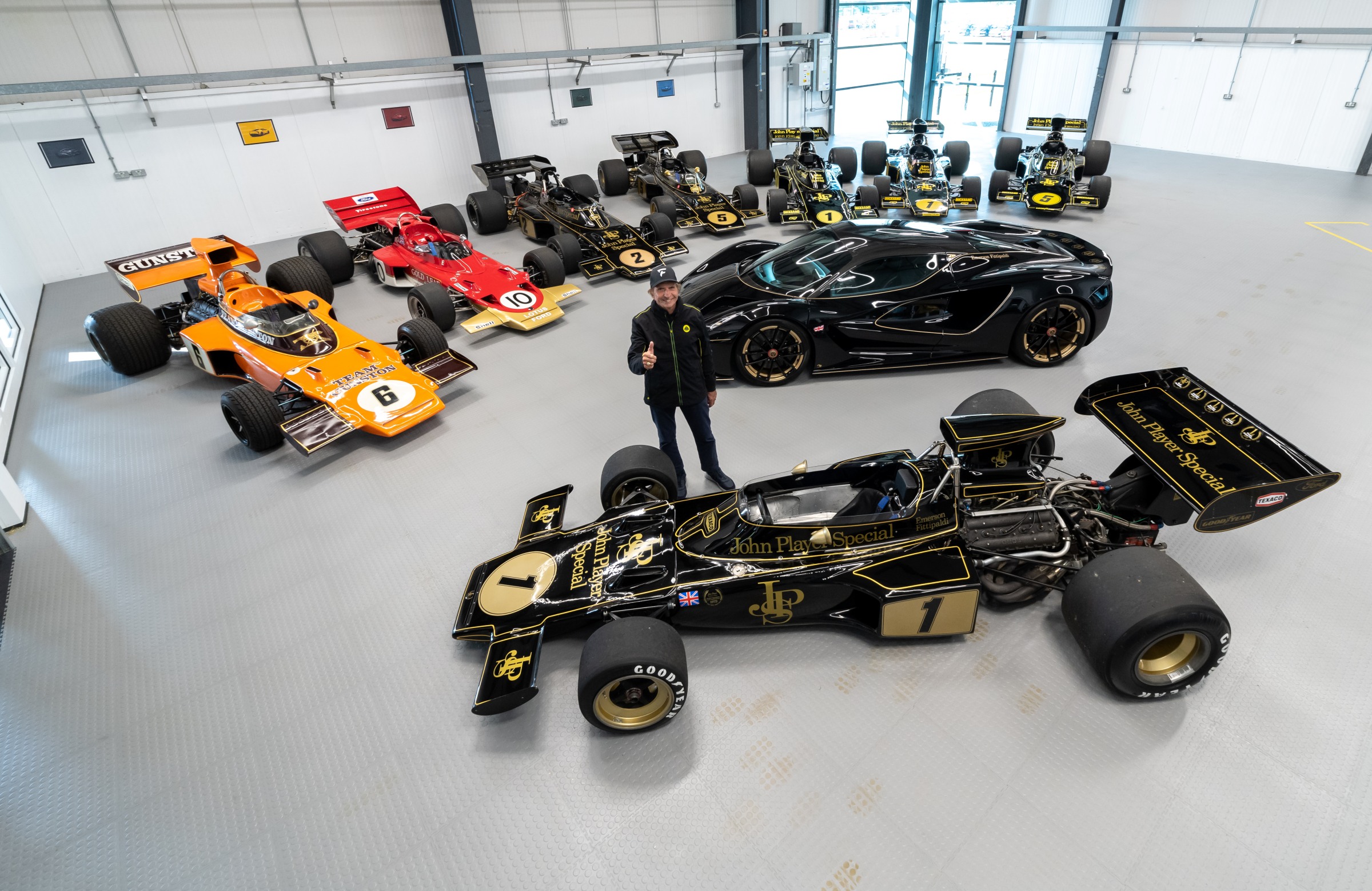 Just as the Lotus Evija defined a new era of pure electric performance, the Lotus Type 72 remains the most successful racing car not only of its time, but in Formula 1 history. In 2019 Motor sports The magazine called it the greatest Formula 1 car. The Type 72 was a revelation both on the drawing board and on the track, and was the first racing car to incorporate aerodynamics as part of its original design. The integrated rear wing and front splitter have been designed specifically to allow the car to slice through the air while generating vital downforce.

The Type 72’s air intake was moved above the driver’s head, providing an unobstructed intake of clean air straight into the engine, while its radiators were located at the sides of the car rather than in the nose. This not only increased the cooling efficiency, but also improved weight distribution – and therefore performance – in the process.

The same approach was used for the brakes, mounting them inside rather than on each wheel to aid cooling when the top of the discs protruded through the body. The Type 72 was the first of what would become the traditional ‘wedge-on-wheels’ design, which soon inspired every other competitor on the grid. 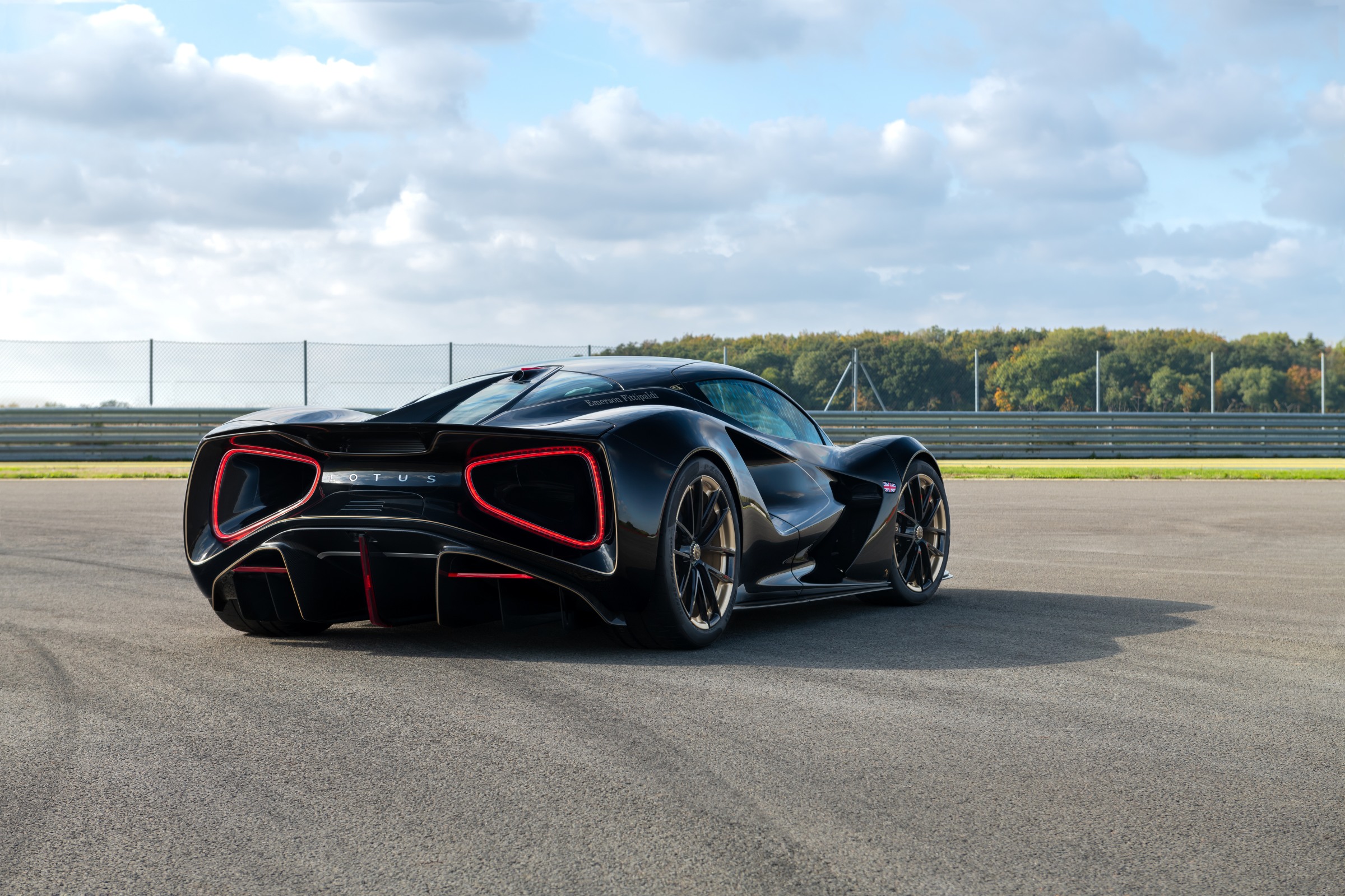