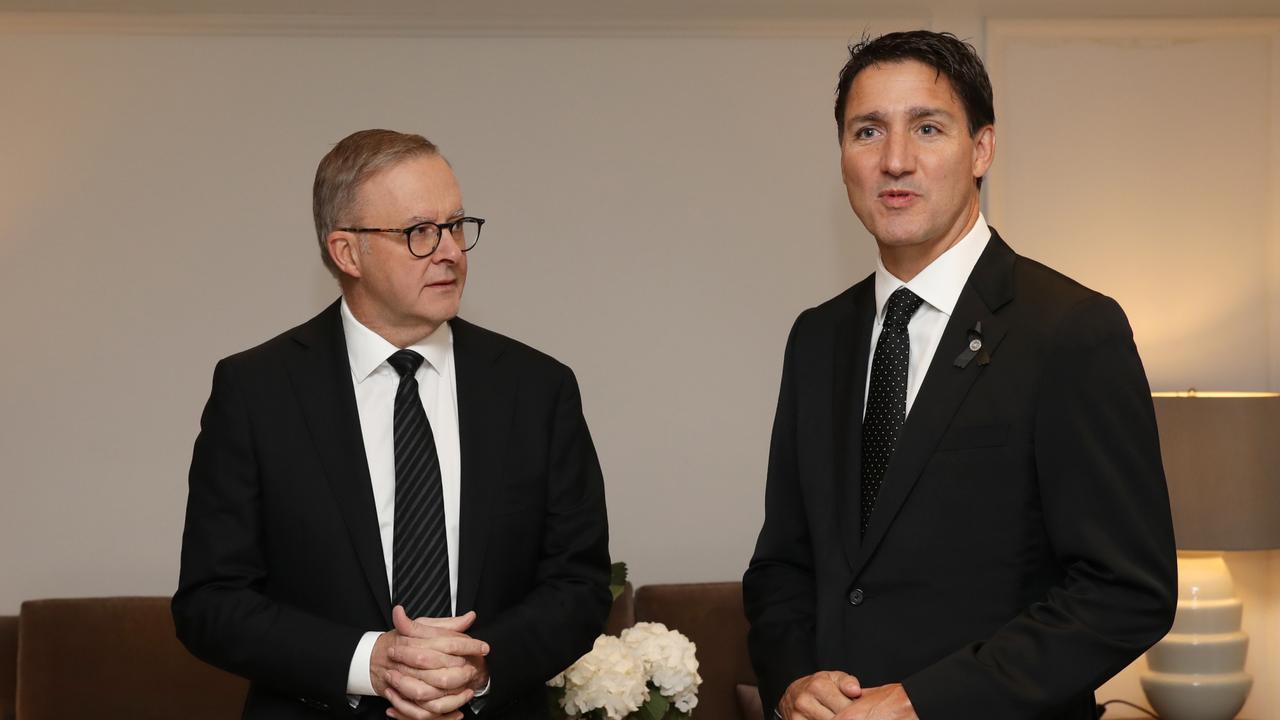 Prime Minister Anthony Albanese met with his Canadian counterpart Justin Trudeau ahead of the Queen’s funeral in London.

Both leaders again condemned Russia’s invasion of Ukraine and agreed to continue close cooperation on economic growth and climate change.

“We have a lot to talk about, it’s very, very nice to see you in person again,” Mr. Trudeau said.

He said the day’s topics would also include critical minerals “in a world where Canada and Australia have a lot of experience with these kinds of values ​​that are important to consumers.”

Mr Albanese spoke of his audience with King Charles, saying it was a “somber” reason to be in London ahead of the Queen’s funeral.

“We’ve both had separate audiences (with the king) but it’s a very dark occasion when we’re together in London,” he said.

“But in terms of recognizing our shared history and our shared values, what we will be talking about is the shared values ​​of human rights in support of the international rule of law in our region.

“Indeed, we saw the Russian invasion of Ukraine, of course, trampling all this. But also we have similar economies and similar challenges, but also opportunities to tackle climate change and grow our economy by creating good, sustainable jobs. And I look forward to another discussion this morning.”

Mr Albanese and Mr Trudeau are among dozens of world leaders who will join the royal family on Monday to bid farewell to Queen Elizabeth at the “funeral of the century” at London’s Westminster Abbey.

In an unprecedented turnout – and security operation – to mark the Queen’s death after 70 years on the throne, US President Joe Biden and numerous presidents and prime ministers will be among 2,000 special guests at Westminster Abbey.

Millions of people are expected to throng the streets of London, leading to a larger and more complex security response than the 2012 London Olympics, with an estimated television audience of four billion viewers worldwide.

The funeral, which included three separate services over more than 12 hours, followed 10 days of official mourning in Britain that saw 24-hour waits and eight-kilometre queues as Britons rushed to pay their respects to their monarch, who lies in state.

Security measures include a ‘ring of steel’, 10,000 police on the ground in the city, as well as rooftop snipers and drone surveillance.

The increased measures disrupted traffic as the number of visitors increased on the streets of London over the weekend.

The Queen’s final journey begins at Westminster Hall before she is buried with her husband Prince Philip and family at St George’s Chapel in Windsor, west London.

Organizers hope to honor the Queen’s “unique and timeless position in all our lives”.

It seems that they have already succeeded in their second hope – to unite the world.

Almost all peoples of the planet will be represented at the funeral, as well as rogue states such as Russia.

At least six kings and five queens will attend, joining the presidents of France, Italy and Germany, as well as six living British prime ministers who have served under the queen.

In a busy schedule, Prime Minister Anthony Albanese will take part in the farewell after meeting his British counterpart Liz Truss.

He was expected to attend the so-called “party of the century” at Buckingham Palace early Sunday morning Australian time.

He met King Charles and bowed at the Queen’s coffin, which he described as “significant” and “emotional”.

“The Queen has touched so many Australians for generations,” Mr Albanese said afterwards.

British authorities had been planning the mass burial for years, if not decades.

Queen Elizabeth’s farewell will, as she intended, lean towards old world conventions.

The Queen’s coffin will display the Imperial State Crown, Scepter and Orb, just as the Queen’s father’s coffin did when he died in 1952.

Her coffin will be carried on the same carriage as her father’s.

The royal women will wear a veil for the service, as tradition requires, and King Charles is expected to sprinkle mud over his mother’s coffin, as his mother did for her father.

There will be bells, cannon firing and drums, as well as pipers and hymns at services at Westminster and Windsor Castle.

In terms of numbers, this event undoubtedly surpasses former Prime Minister Winston Churchill in 1965, the Queen Mother in 2002, and the shock of grief following the sudden death of Princess Diana in 1997.

In the words of the Dean of Westminster, the Rt Dr David Hoyle, the London service will be “a living tradition in action”.

“It’s on a scale that even Westminster Abbey doesn’t do very often,” he said, adding that it would be a “wonderful mix” of grand ceremony and profound words.

“The fact that this is a state funeral is very important,” Dr Hoyle said.

“It has to be visual. It must be grand…”

“But this is a funeral. This is for the grieving family. It’s really important, (it’s) personal grief at the heart of it.”

After the hour-long memorial service, at 8.55pm Australian time, the last fast is sounded, followed by two minutes of silence and a lament played by the Queen’s piper.

Her coffin will leave Westminster Abbey in procession to Wellington Arch in Hyde Park, with King Charles and senior royals following behind, while Camilla, the Queen Consort, and Catherine, Princess of Wales, will ride in a car, as will Meghan, the Duchess Sussex and Sophie, Countess of Wessex.

Australian forces will march in front of the gun carriage, representing the Commonwealth,

along with Canadian Highlands and New Zealand staff.

Once the procession reaches Wellington Arch, the coffin will be handed over to the state

hearse and begin its journey to Windsor.

Crowds will watch somberly as he heads west from London, past Heathrow – even the skies fell silent for the monarch – in an event that stopped the nation and the watching world.

Just after midnight Australian time, the hearse will arrive at Windsor – the Queen’s beloved home – to join another procession waiting at the gates of Show Farm. The hearse will begin its slow journey up Long Lane to the castle, where the King and members of the royal family will join him on foot in the Windsor Castle Quadrangle.

In about ten minutes, the procession will reach the chapel of St. George, where the coffin will lie

ascended the steps and entered the church, and the queen watched her beloved prince

The service will be televised at 1am Australian time, led by the Dean of Windsor and attended by governors-general and prime ministers, as well as past and present members of the Queen’s family.

At the end of the service, the Lord Chamberlain (the most senior position in the royal household) will ceremonially break his wand over the coffin before it is lowered into the royal vault.

A private funeral, which will take place at the King George VI Memorial Chapel, with only close family members in attendance, is scheduled for 4:30am local time.

Afterwards, the Queen’s coffin, along with Prince Philip’s, will be moved from the Royal Vault to the Chapel, where they will finally lie together for eternity.

The royal family, including the Queen herself, along with police forces, governments and transport operators, spent decades planning the funeral pomp and logistics.

Over the weekend, King Charles visited a Metropolitan Police base and inquired about security plans.

He asked the officers, “Have you been planning for a long time…or have you just been drafted?”

One officer replied, “Yes, Your Majesty, we have been planning for about three years. There were teams in front of us.”

He replied, “And the plans are working?”

The officer said, “They are, absolutely.”

“That is most encouraging,” said the king.

Mourners noted that the unprecedented size – and turnout – of the Queen’s send-off was a testament to her resilience and approach over seven decades.

Its power is to remain the same even as the world has changed. She seemed to know what to say – and what not to say.

Her calm approach to the crisis has seen Britain through difficult times.

But it was her kind and warm manner, as opposed to the power of her monarchical position, that is said to have prompted such a wave of grief – and such a uniquely concentrated gathering of the world’s most powerful people.