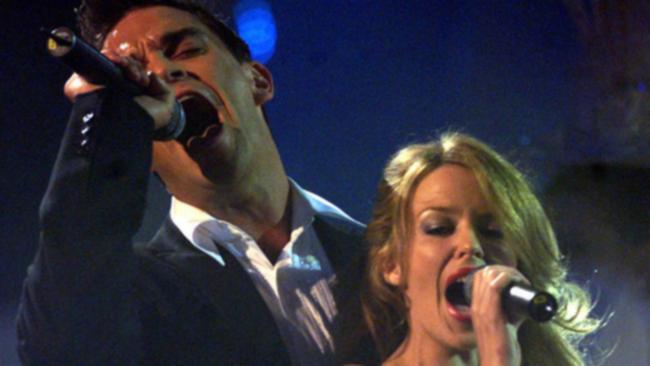 Robbie Williams has publicly invited Kylie Minogue to perform their 2000 duet ‘Kids’ with him at the AFL Grand Final.

The “Let Me Entertain You” hitmaker is set to perform at half-time of the 2022 Toyota AFL Grand Final on Saturday, September 24 at the Melbourne Cricket Ground (MCG) in Kylie’s native Australia.

And the 48-year-old pop star hinted that he and the 54-year-old pop princess could reunite to perform their classic song at the sporting event.

Speaking on FOX FM, he said: “I have to ask her, maybe I have to do it on this radio station right here, right now.

“Kylie, please come and sing with me. I would be very happy if you would.’

He then teased: “I can neither confirm nor deny [but] I’m going to sing a song that’s not a Robbie Williams song. I’ll just put it out there.’

Last year, Robbie teased a new collaboration with the “I Should Be So Lucky” hitmaker.

The former Take That star revealed he and Kylie have “big plans” for what’s next.

He said: “I’ve got a song with Miss Kylie Minogue, I’ve got big plans for her if she’s up for it. I have big plans.”

While an insider said: “Kylie and Robbie have recorded a new song together.

“It’s their first collaboration since ‘Kids’ in 2000 and Robbie is very keen to make it a single.

“There are no specific release plans due to COVID.

“It’s not going to be a mini-drop like Kylie recently did with her Studio 2054 remix of ‘Real Groove’ featuring Dua Lipa.”