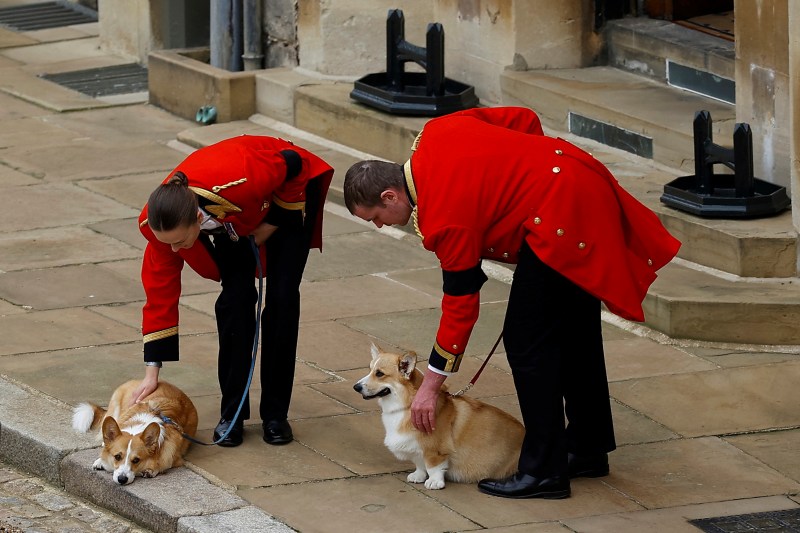 Sarah ‘Fergie’ Ferguson shared pictures of the Queen’s beloved corgis at their new home at Royal Lodge, Windor, as she celebrated her 62nd birthday.

The Duchess of York posted a gallery of Muick and Sandy on the lawn on Instagram with the caption ‘the gifts that keep on giving’.

Her followers wished the Duchess a happy birthday and said the dogs looked happy and healthy.

Ferguson and ex-husband Prince Andrew took the dogs in when the Queen died last month and are now living in the former couple’s home.

In 2021, the Queen received two new puppies, one dorgi and one corgi, as a gift from Prince Andrew while on lockdown in Windsor.

Puppies entertained the jubilant monarch while the Duke of Edinburgh was in hospital and Buckingham Palace and the royal family dealt with the bitter aftermath of Oprah’s interview with Sussex.

The Queen named the dorgi Fergus after her uncle, who died in action during the First World War, and the corgi Muick, pronounced Mick, after Loch Muick on the Balmoral estate.

But the monarch was devastated when five-month-old Fergus died just weeks after Philip’s death.

He was later replaced by a new corgi puppy – from Andrew and Princesses Beatrice and Eugenie before her official 95th birthday – and the Queen named him Sandy.

The puppies have been a constant source of joy for the monarch during her isolation, her dresser Angela Kelly said.

After the Queen’s death, Muick and Sandy moved in with Andrew and Sarah.

Earlier the duchess told Telegraph it was a “great honor” to look after the dogs, which were a “national treasure”.

Muick and Sandy played an important role in the burial of their devoted master.

Dogs on leashes were led into the quadrangle at Windsor Castle for the arrival of the Queen’s coffin ahead of her service at St George’s Chapel.

Muick and Sandy were in charge of two royal pages in red coats, and they took the time to pet the dogs when one of the animals fell headfirst to the ground.

Many of the Queen’s corgis were direct descendants of Susan, who was given to her by her parents in 1944 as a present for her 18th birthday.

The Queen fell in love with her father George VI’s dog Duka, a Pembrokeshire corgi, and wanted a dog of her own.

Susan was so loved that she accompanied Princess Elizabeth on her honeymoon.