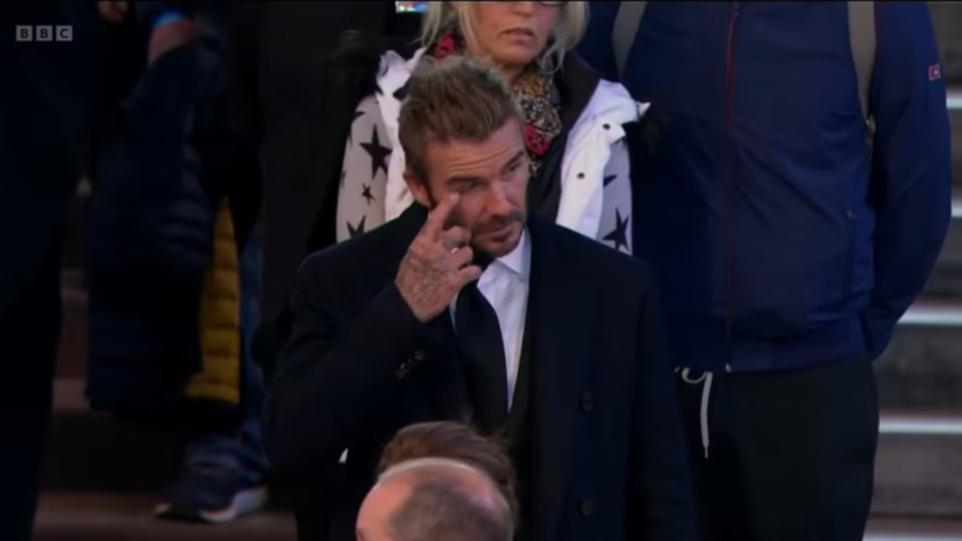 David Beckham was visibly emotional as he walked past Queen Elizabeth’s coffin.

The 47-year-old soccer star joined the queue in London to see the coffin of the late British monarch, who lies in state at Westminster Hall after his death on September 8 at the age of 96, at around 2am on Friday and was seen wiping away tears as he gave respect to her after a 13-hour wait.

“Her Majesty meant so much in so many ways. I can speak for myself how many times I managed to meet her during my career,” he told the media.

“Every time we stood up and put on those Three Lions shirts, I had a band on my sleeve and we sang ‘God Save Our Queen’ – it meant so much to us. Every time we did it, it was something special.”

The former England captain, who is married to ex-Spice Girls Victoria Beckham and has sons Brooklyn, Romeo, 19, and Cruz, 17, as well as daughter Harper, 10, attended alone in a dark cap and explained the ‘Most special’ moment with Her late Majesty was when he was awarded an OBE for services to football back in 2003.

“The most special moment for me was receiving my OBE. I took my grandparents with me, who were big royalists. I am so lucky to have had a few such moments in my life to be around Her Majesty. It’s a sad day, but a day to remember,” he said.

While queuing, David, who was recognized by other mourners and posed for photos with them, explained that he had originally expected the wait time to be slightly shorter in the early hours, but he was wrong.

“I thought coming at 2am it would be a bit quieter – I was wrong,” he said.

Following the Queen’s death on September 8 at the age of 96, the former Manchester United midfielder took to Instagram to pay tribute to Her Majesty and her 70 years on the throne, as well as express his condolences to the royal family, including her son, King Charles III.

“I am truly saddened by the death of Her Majesty the Queen. What an outpouring of love and respect we have seen for the platinum jubilee for her life’s service,” he wrote.

“How devastated we all feel today shows what she meant to people in this country and around the world. How much she inspired us with her leadership.”

The good times for ASX lithium stocks continue on Thursday