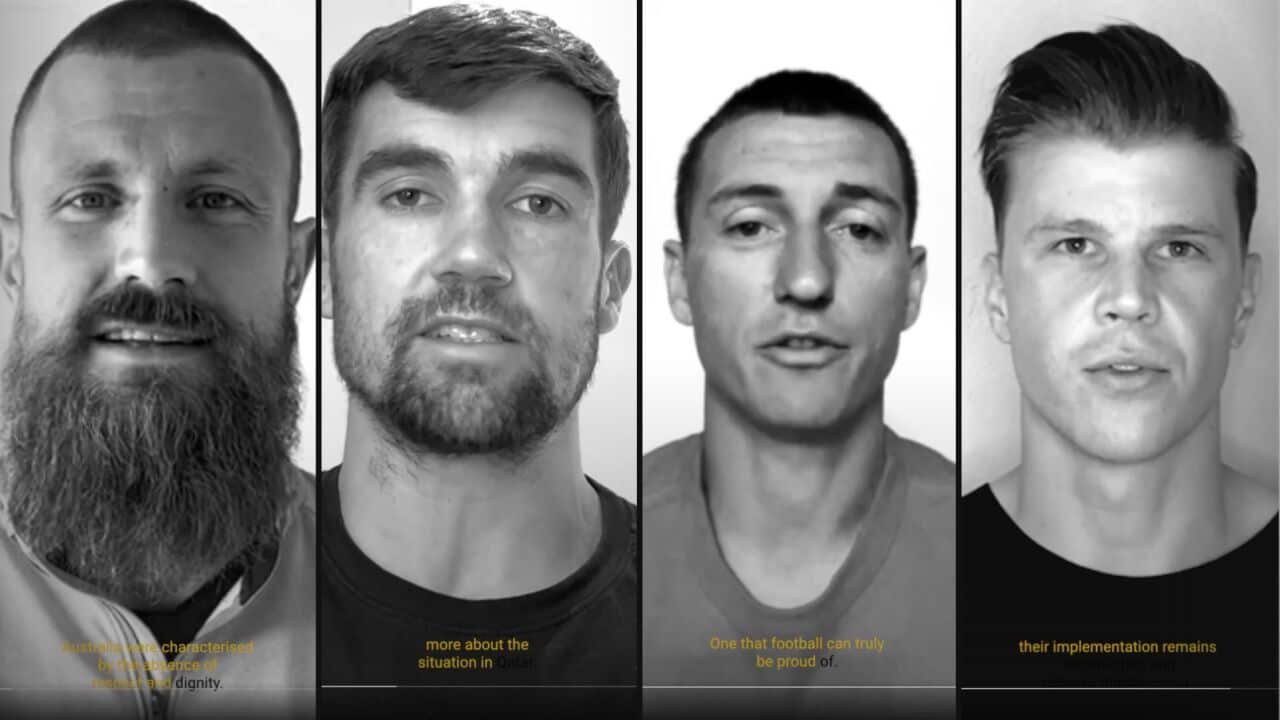 In a collective video statement, the players took turns addressing the camera to explain why they feel the need to address Qatar’s treatment of migrant workers and members of the LGBTIQ+ community.

According to the country’s Criminal Code of 1971, same-sex sexual acts can lead to imprisonment for up to five years.
They said their motivation to speak out was to understand the power of the legacy they want to leave behind.

“There are universal values ​​that should define football. Values ​​like respect, dignity, trust and courage,” the players said in the video.

“When we represent our nation, we strive to embody these values.”
The players said they’ve spent the past two years learning more about the groups’ experiences, adding that they don’t claim to be experts and don’t have all the answers.

“These migrant workers who have suffered are not just numbers. Like the migrants who shaped our country and our football, they possessed the same courage and determination to build a better life.

“As players, we fully support the rights of LGBTIQ+ people. But in Qatar, people cannot love the person they choose.
“Solving these problems is not easy, and we don’t have all the answers.”
The team called for measures to be implemented, including the creation of a migrant resource center, effective remedies for those deprived of their rights, and the decriminalization of all same-sex relationships.

The Socceroos said they worked with a number of groups to arrive at their position on Qatar, speaking to Australian professional footballers, FIFA, the Supreme Committee, the International Labor Organisation, FIFPRO and Qatar’s migrant workers.

Professional footballers Australia applauded the video statement, saying there was recognition that the views “may not be universally popular”.
The group urged people to keep the debate civil.

“Some will feel they haven’t gone far enough, while others will urge them to stick to football and stay out of ‘politics’ despite it being a human rights issue. This polarity speaks volumes for the courage of the players as well as the increasingly fractured nature of the world,” Australia’s professional footballers said.

“As we get closer to the start of the game, players from each country will continue to be asked about their position in relation to Qatar.
“Recognizing that the players did not reward the host country of the World Cup is crucial. They have no right to influence its delivery and operation.
“Beyond the lack of leadership from the administrators tasked with granting the rights to host and manage the tournament, the moral leadership rested on the shoulders of the players, coaches and fans.”
The national teams of Germany, Norway and Holland have protested human rights abuses in Qatar with slogans on their shirts and uniforms.

What are the human rights issues?

Last week, Amnesty International published an assessment of labor protection reforms, finding that Qatari authorities have made some progress in protecting migrant workers, but much remains to be done.
“After all, human rights violations continue on a significant scale today,” said the report, titled Unfinished Business.
“Given that both Qatar and FIFA have benefited from the labor of migrant workers, they cannot simply turn the page and forget those who suffered to make the event possible.
“They must work together to urgently create a comprehensive redress program that provides financial compensation to workers and their families and supports initiatives to prevent future abuse.”
Since the country won the right to host a decade ago, at least 6,500 migrant workers from India, Pakistan, Nepal, Bangladesh and Sri Lanka have died in the process of building football stadiums, according to from government sources, the Guardian newspaper reports.
The lack of enforced labor protections and the use of the kafala sponsorship contract, which links the legal status of the worker to the employer, have created an environment where exploitative methods such as confiscated passports, stolen wages and overcrowded camps are used.

Qatar, the first country in the Middle East to host the FIFA World Cup, is preparing to welcome 1.2 million visitors during the tournament from November 20 to December 18.

What did Qatar say?

“Initially, we approached the matter in good faith,” Sheikh Tamim said, adding that the initial comments were seen as constructive.

But he now said the claims “included fabrications and double standards that were so egregious that they unfortunately caused many people to question the true reasons and motives of the campaign.”
In August, Qatari officials during the tournament.

“Everyone will be able to come, enjoy the games and support their teams, regardless of their background, religion or gender,” said Fatma Al-Nuaimi, executive director of communications for the tournament’s Supreme Delivery and Legacy Committee.