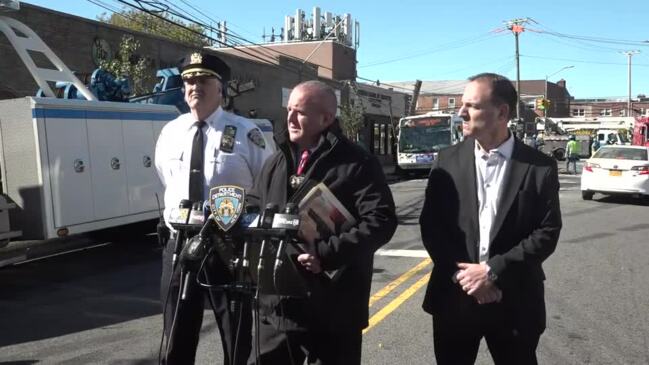 A city bus crashed near a school building in Queens, New York, Thursday morning, Oct. 27, after a man armed with a BB gun hijacked the vehicle and forced the operator behind the wheel at gunpoint, police said. According to preliminary information provided by the New York Police Department (NYPD), around 7:23 a.m. Thursday at 199th Street and Linden Boulevard in Queens, a 44-year-old man ran in front of a Q4 bus “with what appeared to be a firearm in his possession hands”. The man boarded the bus and the driver immediately opened the door to allow passengers to exit, police said. The suspect told the driver he was being followed and told him to keep moving. After passengers got off the bus, the driver continued to drive at gunpoint until 7:36 a.m., when he jumped out of the driver’s side window in the area of ​​232nd Street and Linden Boulevard. The suspect got into the driver’s seat and tried to take control of the bus. The bus continued down Linden Boulevard before striking a utility pole and coming to a stop mid-block between 233rd and 234th Streets. The alleged hijacker was apprehended by responding officers across the street as he attempted to flee the bus. He and the driver were treated for minor injuries. At this press conference you can see a damaged bus with a damaged pole leaning against it. Police quoted Con Edison as saying that any power outages are expected to be resolved in the coming hours. Police have asked anyone who was on the bus or who may have more information to contact them. Credit: NYPD News via Storyful