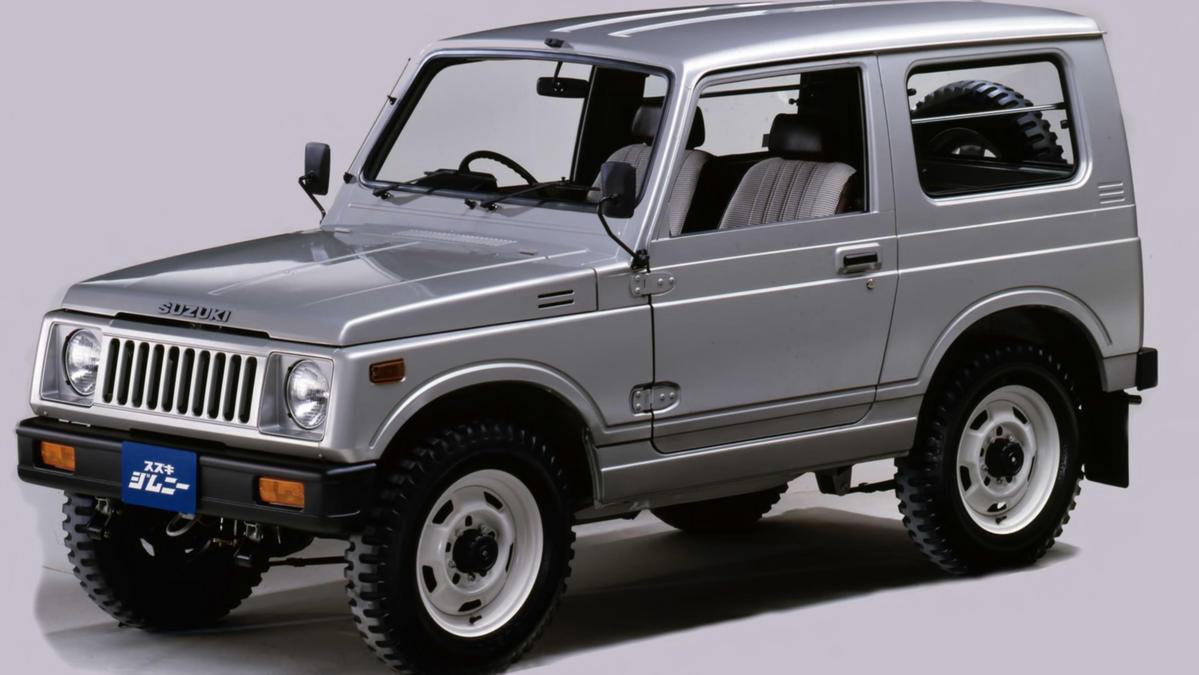 Suzuki is a brand of contrasts.

While the Japanese brand’s motorcycle business runs the gamut from scooters to Hayabusa supercars, its car business — with the exception of the likes of the XL-7, Grand Vitara and Kizashi — has focused on smaller, more affordable vehicles.

The Jimny is a prime example of this and perhaps the brand’s most iconic car.

Conventional thinking once held that consumers should go with models like the Land Rover Defender or the 70 Series Toyota LandCruiser to have a vehicle that would satisfy those looking to go off the beaten track.

The Jimny, however, takes a different approach. Offering the same body-on-frame layout as those models, but in a much lighter and smaller package with greater approach and departure angles, Suzuki has long been able to compete with their capabilities at a lower price.

Let’s see how the Jimny came to be. This is the first part, we will finish the series next weekend.

Origins: A Ray of Hope?

Perhaps surprisingly, given Suzuki’s almost total emphasis on small, light and affordable cars, the original concept did not come directly from Suzuki, but from a niche Japanese car brand known as Hope Motor Company in the 1960s.

Although Suzuki had been exploring the possibility of an SUV that could still meet kei-car regulations, the acquisition of Hope Motor in 1968 gave the project real impetus.

At the time of purchase, Hope Motor had expertise in building compact three-wheeled autorickshaws, which are still commonly used in India and other Southeast Asian and other developing countries.

However, faced with stiff competition from rivals including Daihatsu (owned by Toyota since 1967), it largely ceased production of these three-wheelers in favor of a model called the Hopestar ON360.

It was the company’s last roll of the dice, a simple open-top 4×4 that collected parts from rival Daihatsu, as well as wheels from a version of the American Jeep that Mitsubishi was building under license at the time. along with other Mitsubishi parts.

Unfortunately for Nadzia, her precarious financial situation meant that only a few units were produced as efforts to convince Mitsubishi to produce the design on a larger scale failed.

Instead, Suzuki came to the rescue and, as part of a company-wide acquisition, was able to acquire the ON360 design for ¥12 million (now worth just $460,519).

While Suzuki bought the rights to the ON360 design, the initial models produced by Hope Motor were actually rough prototypes that lacked even basic features like a fuel gauge.

Therefore, in the first generation, Suzuki concentrated on making the car suitable for mass production and replacing parts borrowed from competing Japanese companies with Suzuki products.

To this extent, the previous Mitsubishi engine was replaced by a 359cc air-cooled twin-cylinder unit that produced just 18kW of power, but the vehicle still had basic 4×4 elements such as a two-speed transfer case with low range and body. on a frame structure.

Notably, the need to keep the overall length under 3m to comply with Japanese kei-car regulations of the time meant that the spare wheel was fitted inside, limiting the car to a three-seater only.

This initial version was known as the LJ10, where LJ stands for “Light Jeep”. An upgraded version of the LJ20 featured a more powerful water-cooled engine for a top speed of 80 km/h and was introduced in 1972.

The Australian market got its first taste of the Jimny in 1975 with the more powerful LJ50 iteration (also known locally as the Stockman 4WD). With kei car regulations in Japan now allowing vehicles with a maximum engine capacity of 550cc, importers deemed the appropriately equipped LJ50 suitable for Australian roads.

Despite the big power, the LJ50 kept a very modest power output of just 25kW and 57Nm of torque, allowing it to achieve a claimed top speed of 97km/h.

A further improvement came in 1978, with Australian LJ80 models now using an even more powerful 797cc, 31kW four-cylinder engine. These models were available in a variety of body styles including soft top, soft top with steel doors, and hard top and cab chassis options.

The second generation Jimny is perhaps the model that really started its global popularity.

While retaining the ladder-frame layout of its predecessor, the second generation added a host of improvements, such as the addition of gas shocks to the leaf-spring suspension, a range of larger new engines for export markets, more cohesive styling and a new (though still agricultural) interior.

The most important thing is that the model has retained off-road capability.

Examples intended for sale in Australia began arriving in late 1981, and the model was now known simply as the Suzuki Sierra (other markets also used the name Suzuki Samurai).

Like its predecessor, soft top, chassis cab and hard top variants will be offered, but the Jimny will now be powered by a larger 1.0-litre 39kW engine to ensure a comfortable top speed of over 100km. /g for the first time.

The 1985 model year cars added to this with improvements such as a 5-speed manual transmission and power-assisted front disc brakes, as well as an engine displacement to a heady 1.3-litre unit.

A rear-wheel-drive soft-top version known as the Sierra Samurai was also introduced, but regardless of the variant, the larger engine meant that power was increased to 49kW, so the Jimny could now exceed 110km/h. limit in most Australian states.

Interestingly, the second generation also featured a version with the 1985 model year badge known as the Holden Drover. Sold for just two years until 1987, the Drover was identical to the Sierra except for the lack of a cab chassis or rear-wheel drive.

Generational improvements usually lead to price increases as well, but the Jimny was priced pretty much in line with its predecessor, starting at $6,220 in 1981 ($25,747 today).

This is the first part, we will finish the series next weekend.