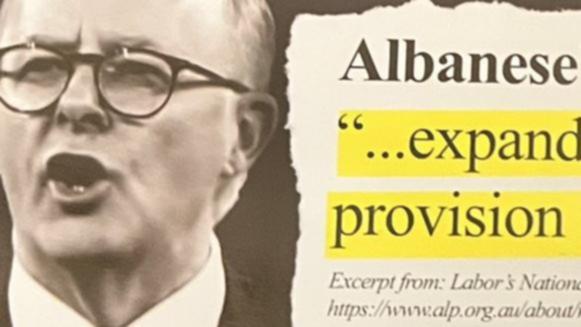 The brochures, which are delivered to voters on the marginal estates of Macquarie, are reported to have the slogan: “Labor wants you to fund abortions.”

Image of one of the brochures posted to Twitter states that they were authorized by the “for life” group Cherish Life Queensland.

Assistant Minister for Women’s Affairs of Australia Amanda Stoker caused controversy recently attending one of the group’s rallies in Brisbane.

Last week, Prime Minister Scott Morrison said he did not want the debate on abortion, which is now being absorbed by the United States, to take place in Australia, as it could “deeply divide the country”.

“I do not intend to put this on the agenda because I believe it could be a very divisive and polarizing issue, and I would not recommend that it be part of our national debate,” he said.

In the last election, Labor said it would make tax-funded abortions available in public hospitals, but the party did not announce a similar policy in the election.

In the past, group leaders have argued that their religious beliefs force them to oppose abortion.

“Shake the life of the campaign in the key election,” the group’s website says.

“We are doing this to help keep MPs and parties advocating abortion and euthanasia from the government to protect human life. We have no political affiliation or affiliation, but we will focus on those who are focused on life. “