The yen continues to depreciate against a strong dollar, with the latest surge higher following last week’s G7 meeting, which discussed additional dollar effects but, crucially, no mention of a coordinated intervention to pull out of Japan. with solo meddling and continued “jaw punching” as the most likely responses.

The yen’s decline follows a typical “carry trade,” a process that seeks to profit from borrowing from less profitable currencies such as the yen to invest in more profitable currencies such as the dollar. As long as the Fed continues to aggressively raise interest rates and the Bank of Japan (BOJ) continues to cap its interest rates (to stimulate a historically deflationary economy), the imbalance will persist. As for changing his ultra-dovish stance on monetary policy, the Bank of Japan’s Wakatabe indicated last week that the Bank would like to see inflation stabilize at 2% over the long term before thinking about changing policy. Japan’s upcoming inflation data on Friday will provide a clearer indication of whether the 2% target is moving in the right direction.

The first round of Japanese currency intervention of the 21st century took place on September 22nd, and although it sent the USD/JPY sharply lower, the effects were short-lived. On October 11, the price action broke above the September 22 high just below 146 and continues to rise. Friday’s advance to 149 has many wondering if the next phase of intervention is imminent as the pair trades only slightly lower than last week’s high. Japan said volatile one-way movements were the problem, but there would certainly be concern about the actual level of the exchange rate.

149 remains a crucial level for short-term price action, followed by the psychological level of 150. The RSI remains in overbought territory, however, the pullbacks have proved to be short-lived, even if we see a reasonable move down due to talk of a possible intervention – which could be implemented during periods of low liquidity. For now, the trend remains up as markets seem happy to test Japan’s resolve. Support comes at the previous high of 147.69 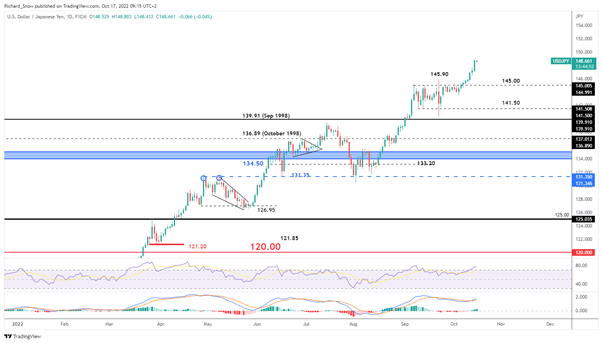 How to trade USD/JPY

The 4 hour chart shows what looks like a “bull flag” – usually a bull formation. However, the longer the USD/JPY trend higher, the more likely it is to intervene, meaning that risk management becomes increasingly important in a trend-following strategy at such extreme levels. 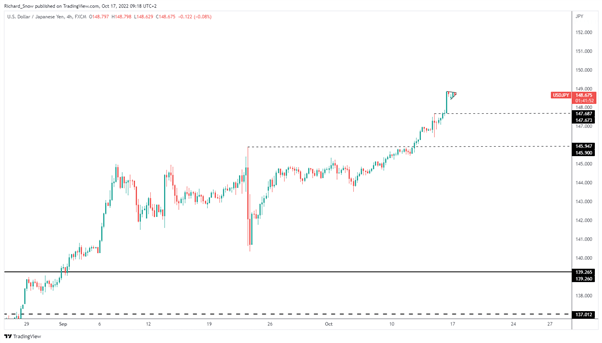