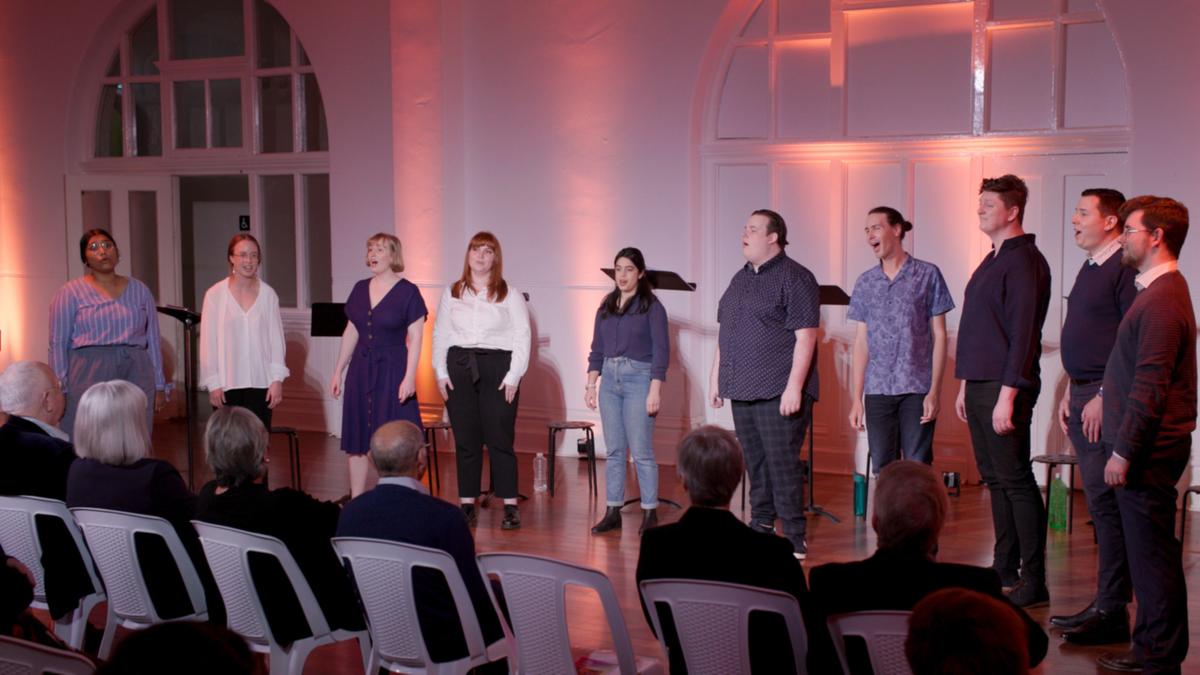 An evening of dense choral harmonies and vibrant vocals showcased four world premieres and some firm favorites at the Vanguard Consort Studio 2022 concert at Freo’s Old Customs House on Saturday.

Shruti Rajasekar’s album SORTED had its Australian premiere at the Vanguard concert in June, its tagline “See, Say, Sorted!” taken from a British Transport Police report saying a message and then breaking into a rhythmic chant.

Tenors Kieran Lynch and Stefan Pugliese took the lead with a warmer melody before handing over the chorale to sopranos Georgia Crowe and Kira O’Dell, mezzo Lydia Gardiner, altos Gabriel Shegio and Maduvanthi Venkatesan, baritones Alex Wheeler and Curtis Novacek and bass Jack Kay ; a 10-piece remix for the finale.

Sydney composer Yulia Vlahoyanis presented the first premiere of “Entwined”; workshops with Vanguard and drawing on jazz and ‘Balinese gamelan’.

The warm light signaled a change in mood, bringing steady notes in the male voices with rhythmic, clockwork highlights in the female lines. The tone morphed into a regular chorus and then back again, mixing and repeating with anthemic overtones before settling into unison and back again to rhythmic clarity; fading close.

UWA student Rose Russell was next with Agnus Dei, inspired by Samuel Barber’s version and using what Russell said were many open vowel sounds in three lines of sacred text with “spice” added through Vanguard workshops.

Cool blue light sets the stage for a vibrant introduction; a soprano that rises above a dense soundscape. The repetition of the title line gradually led to a more conventional tenor voice, then restored the complexity of the opening; tightly packed polyphonic notes that create a kaleidoscopic wall of sound.

Control of tone and pitch was exacting and polished in delivery with voices well matched in strength and quality, exploring the void of the ceiling above the audience in an authentic cathedral atmosphere.

From the magical to the demonic, Melbourne pundit David Wyatt presents his setting of the witch song from Macbeth, Baboon’s Blood; taking the “strange sisters” of Shakespeare’s tragedies on a cinematic journey to resolution in F-sharp.

Warmer lighting evoked a cacophonous horn and chatter, half baboon-half witchery, with the Bard’s lines interspersed with high chords and a chromatic progression that added drama to the well-known refrain: “Double, double toil and trouble; The fire is burning and the cauldron is bubbling.”

The singing was imbued with an almost childlike glee as the music soared and swirled in sync with the witch’s incantation, adding intrigue with a touch of danceable creepiness before the final stanza: “Chill him with baboon blood, Then the spell will be hard and good.”

Surely something evil is coming.

UWA student Madeleine Hammond rounded off the quartet with Mirage, a meditation on the ‘otherworldly’ nature of rural Australia and the 2019-2020 bushfires. A previous contestant on the Vanguard Studio series, Hammond said she knew the choir and was encouraged to explore further.

The outward opening contained a sense of foreboding, with hints of a harsh wind of fortune, onomatopoeia, and a more conventional song:

A mirage swallowed by the red desert

The breath of the wind draws in and does not exhale.

The combination of bouts of breath and full choral harmony created a dystopian music of the spheres, evoking a sense of isolation, even alienation; landing at the end on a hesitant chord.

Originally a costumed performance of poetry slam set to music, this time the settings were minimal but no less effective. The vignettes and sketches are played out in the form of monologues and dialogues accompanied by an often speechless, sometimes nonsensical chorus; finally reforming into a group of 10 people.

Finally, “Poetry of the Dead” — from Sara Bareilles and Justin Tranter, flanked by Pugliese, who also hosted the evening — presented perhaps the simplest palette of the night; the wife hums gently in the background for Venkatesan’s poppy solo.

Subtle harmonies and percussion evoked an innocence of expression and a warm conclusion.