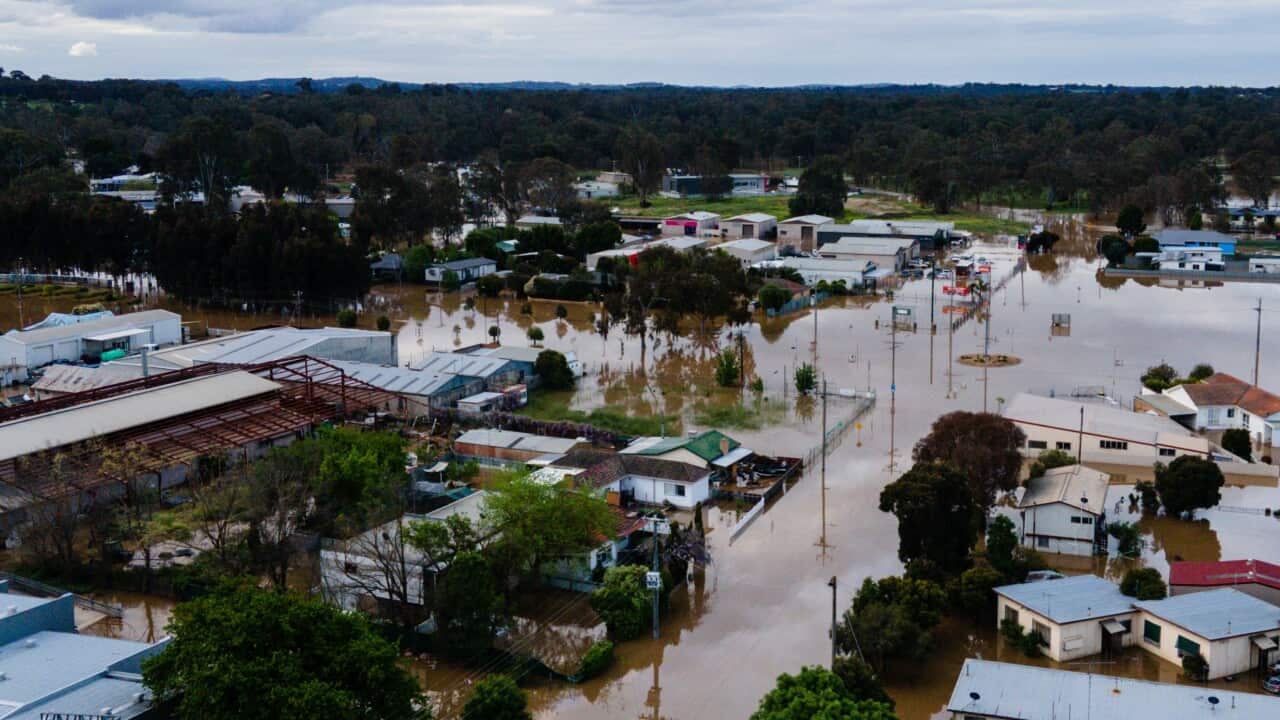 The flood crisis in northern Victoria continues to worsen, with hundreds of homes flooded and dozens of people rescued from rising waters.
Emergency authorities have ordered residents of Charlton and Echuca to evacuate their homes immediately.
Those in Shepparton, Orval, Murchinson and Mooroopna were told it was too late to leave as more than 600 homes and businesses were flooded across the state.

According to the Victorian State Emergency Service (SES), 103 people have been rescued in the past 24 hours following the flooding, with the majority in the Shepparton area.

Premier Anthony Albanese flew to Bendigo to visit the area with Premier Daniel Andrews.
“This is very serious weather that is affecting urban communities as well as regional communities across Victoria, but particularly in the north and north-west,” Mr Albanese told ABC radio on Sunday.
“We will work with the Andrews Government to make sure people get the support they need at this difficult time.”

Australian Defense Force personnel are assisting authorities to evacuate residents and an evacuation center will be set up in Mickleham at a Commonwealth facility.

Echuca is expected to be hit by two peak floods, including one on Tuesday and another later this week.
Authorities predicted that about 200 Echuca homes would be affected by the flood.
Residents have been advised to prepare to be out of their homes for seven to ten days, with the village of Echuca expected to be hit by the impact of the Goulburn and Murray rivers by the middle of next week.

“If you haven’t evacuated, you need to hide in the highest possible place,” the State Emergency Service noted.

A highway bridge at Oxedal, east of Bendigo, was damaged by floodwaters from the Campaspe River. Source: AAP / DIEGO FEDELE

The Midland Highway, also known as Mooroopna Road, was due to be closed on Sunday afternoon but was closed on Saturday evening between Mooroopna and Shepparton.

The Goulburn River in Shepparton rose above the major flood stage of 11 meters overnight and is expected to top 12 meters by Sunday evening, a record level.
SES Chief Operating Officer Tim Wiebusch said when the weather cleared, people may have underestimated the danger.
“One of the problems is that we don’t have what we call blue skies,” he told ABC News.

“The rain has stopped … I think it’s more obvious to people when it rains harder.”

Mr Wiebusch urged people not to drive through the flood.
“It just ties up our emergency services that could be supporting the more vulnerable communities that are under pressure from these floods,” he said.

The Goulburn River in Shepparton rose above the major flood stage of 11 meters overnight and is expected to top 12 meters by Sunday evening, a record level.

More rain is expected on the New South Wales coast

More rain could hit the New South Wales coast as people living in already saturated catchments brace for more water to hit flood-hit communities.
The Bureau of Meteorology said showers and storms could develop on the east coast on Sunday evening, although inland areas which have received the bulk of the recent rainfall are expected to be spared further flooding.
But another storm system is forecast to develop over central Australia on Tuesday, bringing widespread rain and thunderstorms to eastern states by the middle of next week.
On Saturday evening, the National Emergency Management Agency ordered the evacuation of residents in parts of Narandera, on the Murrumbidgee River in the Riverina region, due to moderate flooding.

People in tourist and caravan parks in Moama were asked to prepare to leave and an evacuation center was set up in the border town.

Heavy downpours in Victoria are expected to affect towns along the Murray River, including Moama, from midweek.

A severe flood warning was issued for 11 NSW rivers on Sunday morning, with further flooding possible in some areas despite a temporary break in the rain.
Thousands of people in Forbes, in the state’s central west, were affected by flooding after the Lachlan River reached its peak on Friday night.

New South Wales SES southern zone commander Benjamin Pickup said on Saturday that river levels were likely to rise quickly even if the weather was good due to significant rainfall in western New South Wales over the past few weeks.