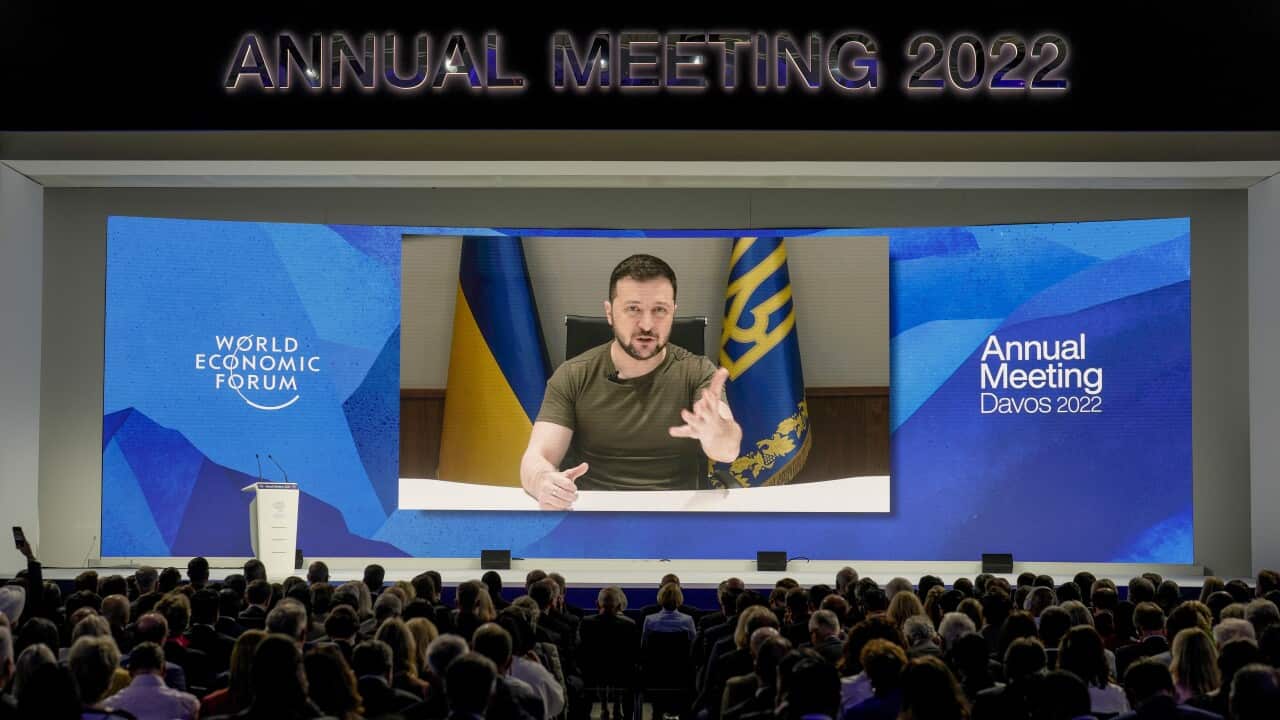 Ukrainian President Volodymyr Zelensky told world business leaders that the world must increase sanctions against Russia to keep other countries from using “brute force” to achieve their goals.
Mr Zelensky spoke via video link to the World Economic Forum in Davos, when the Ukrainian military claimed to have restrained a Russian attack on Severodonetsk, a city in the east that had become Russia’s main target after the southern port’s surrender. Mariupol last week.

He also revealed Ukraine’s biggest military losses in a single war attack on Monday, saying 87 people were killed last week when Russian forces struck a barracks where troops were stationed at a training base in the north.

Earlier, Ukraine said that a strike on the barracks in the town of Desna on May 17 killed eight people.
In the first of many trials of war crimes following Russia’s invasion on February 24, a court in Kyiv sentenced a young Russian tank commander to life in prison for killing an unarmed civilian.
Prosecutor General of Ukraine Irina Venediktov said that about 13 thousand cases of alleged war crimes in Russia are being investigated.
Russia denies targeting civilians or involvement in war crimes while conducting what it calls a “special military operation” in Ukraine.
As the conflict enters its fourth month, Zelensky called on the countries to put more pressure on Russia and accused them of not exhausting sanctions.

“Sanctions must be maximized so that Russia – and every other potential aggressor wishing to wage a brutal war against its neighbor – is aware of the immediate consequences of its actions,” he said at a meeting in Davos.

He demanded the imposition of an oil embargo, the blocking of all Russian banks and the cessation of all trade.

U.S. Secretary of Defense Lloyd Austin said Monday that 20 countries have approved arms supplies to Ukraine.
Greece, Italy and Poland have agreed to send artillery systems, Mr Austin said, while Denmark has promised missiles and several others have promised training assistance.
He added that the group of countries supporting Ukraine with weapons has grown since its initial meeting last month in Germany, which now also includes Austria, Bosnia and Herzegovina, Colombia and Ireland, bringing it to 47 members.

The next meeting is scheduled for June 15 on the sidelines of the meeting of NATO defense ministers.

Russia has focused its offensive on the eastern Donbass region since its troops were driven out of the area around the capital Kyiv and the north in late March.
Having captured Mariupol last week after a three-month siege, Russian troops now control an almost intact section of the east and south, freeing more troops to take part in the main battle in the Donbas.
Russia is trying to encircle Ukrainian forces and completely seize Luhansk and Donetsk regions, which are part of the Donbass and where it supports separatist forces.
Ukraine said that Russian troops tried to storm Severodonetsk, but unsuccessfully retreated.

The city is in the easternmost part of the pocket of the Donbass, which is under Ukrainian rule, and in one of the last areas of Luhansk, which are still out of Russia’s attention.

Soldiers of the People’s Militia of the Donetsk People’s Republic in the DNR-controlled Mariupol. Credit: TASS / Sipa USA

Luhansk district governor Sergei Gaidai said Russia was “wiping Severodonetsk off the face of the earth” and was trying to move forward on three sides: seize Severodonetsk, cut off its highway and cross the river further west.

The leader of the Russian-backed separatists in Donetsk, Denis Pushpin, said on Monday that Ukrainian prisoners of war captured at the capital’s Azovstal plant in Mariupol could also face trial.
“Now they are kept on the territory of the Donetsk People’s Republic. It is planned to organize an international tribunal later. “
In other events, a Russian diplomat at the country’s permanent mission to the UN in Geneva said he was resigning because of his disagreement with the invasion of Ukraine, a rare political resignation due to the war.
Boris Bondarev, who called himself an adviser on arms control at LinkedIn, told Reuters: “The scale of this disaster has forced me to do so.”

A Ukrainian court has sentenced a Russian soldier to life in prison on Monday for killing an unarmed civilian in the first war crimes trial following Russia’s February 24 invasion.
Vadim Shyshimarin, a 21-year-old tank commander, pleaded guilty to killing 62-year-old Alexander Shelipov in the northeastern Ukrainian village of Chupakhovka on February 28 after receiving orders to shoot him.
Judge Sergei Agafonov said that Shishimarin, following the “criminal order” of a high-ranking military man, fired several shots into the head of the victim with an automatic weapon.
“The court ruled: Shishimaryn Vadzim Yauhenavich … was found guilty … and sentenced him to life imprisonment,” he said.

“Given that the crime committed is a crime against peace, security, humanity and international law … the court does not see the possibility of sentencing Shishimarin (shorter) to a fixed term of imprisonment.”

Russian military man Vadim Shishimarin is on trial on the second day of the trial for war crimes in the Solomensky District Court of Kyiv, Ukraine, May 19, 2022. Source: EPA / ALEG PETRASYUK / EP

Shishimarin, wearing a blue and gray hooded sweatshirt, silently watched the trial from a reinforced glass box in the courtroom and showed no emotion while reading the verdict.

Most of the time he stood with his head down and listened to the interpreter standing with the two guards at the reinforced glass box.
The trial is of immense symbolic significance to Ukraine, which accused Russia of atrocities and atrocities against civilians during the invasion and said it had uncovered more than 10,000 possible war crimes.
Russia denies attacks on civilians or involvement in war crimes.

The Kremlin did not comment on the verdict immediately. Earlier, she said she had no information about the trial and that the lack of a diplomatic mission in Ukraine limited his ability to provide assistance.

Ukrainian state prosecutors said Shishimarin and four other Russian servicemen stole a private car to escape after their convoy was targeted by Ukrainian forces. The soldiers then drove to the village of Chupahauka, where they saw Shelipau riding a bicycle and talking on the phone.
The prosecutor’s office said that another soldier ordered Shishimarin to kill a civilian so that he would not report the presence of Russians, and fired several shots through the open window of the car from a machine gun at Shelipov’s head. Shelipov died on the spot.
In court last week, Shishimarin admitted his guilt and asked to forgive him the widow of the victim Ekaterina Shelipova.
Speaking Monday at the World Economic Forum in Davos, Switzerland, Ukrainian President Volodymyr Zelensky said 87 people had been killed in an attack by Russia earlier this month on a military base in northern Ukraine, which had previously been returned by Kiev troops.

“Today 87 victims are under the rubble in Desna. Eighty-seven corpses, victims who were killed, “- said Zelensky, referring to Russia’s strikes on May 17 in the village, where the Ukrainian military base in Chernihiv. reg.

Tenil Lee Hassan has been jailed in Brisbane