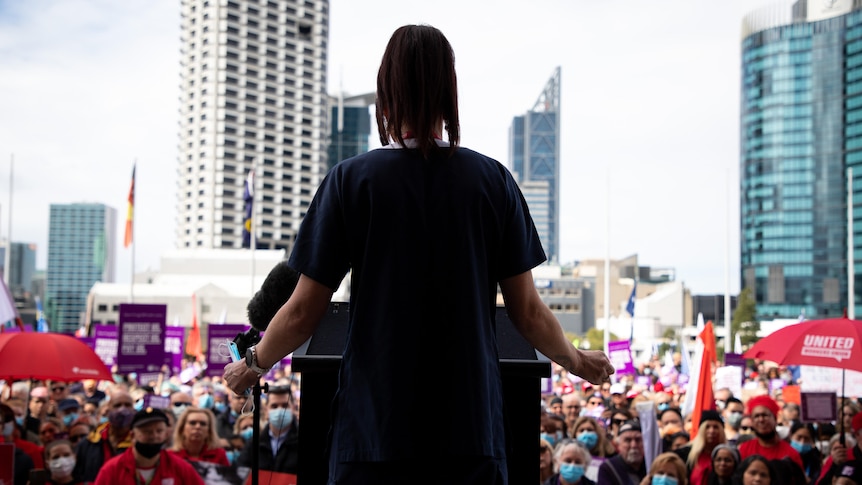 Nurses are warning the public to avoid hospitals next Wednesday amid protests following the breakdown of talks with the government over pay and conditions.

Nurses will walk off the job from 11am to 2.30pm for a walkout meeting to protest the government’s refusal to introduce nurse-to-patient ratios.

“We are advising the public to avoid hospitals if you can on October 12 for a couple of hours between midday and 2pm,” Australian Nurses Federation WA secretary Janet Rea said.

“Give nurses the opportunity to come, talk and discuss action and get what they deserve.”

ANF ​​warns that the meeting will only be the beginning of mass action, which will increase if the government does not come to the negotiating table.

The state government is currently in talks with a number of public sector unions and last month was forced to table its third pay offer in less than a year.

But the ANF, which represents the state’s 39,000 nurses, midwives and carers, wants the government to also agree to a number of conditions.

WA hospitals currently use the Nurse Hours Per Patient Day (NHPPD) system, which the union says is not working.

“This government has missed another opportunity to postpone our mass meeting next week by failing to meet our demands,” Ms Rea said.

“The only reason I can see this delay is because the government doesn’t want to talk about the ratios because that will expose the understaffing and it’s black or white, if you have the ratios, you either have enough staff or you don’t.

“While they are currently fudging the numbers with the NHPPD, they have been lying for two years about the extent of our shortage of nurses and midwives.”

Several other states in Australia have adopted nurse-to-patient ratios, including Victoria, which mandates one nurse for four patients during the day and one to eight patients at night.

Ms Rhee said the Government should start by accepting the ratios and start trying to implement the Victorian model.

She said the nurses’ Bargaining Agreement (EBA) expires on October 11 and the government has had plenty of time to meet their requests.

“They had our claim log from May and it was detailed in that claim log, the pay rise we wanted and the ratios,” she said.

“They have to commit now, and then we can put together a task force to figure out what the ratios will look like in different districts and districts across the state.”

Ms. Rea acknowledged that the ratios may not be achieved immediately, but she was confident that they could be achieved within months.

ANF ​​would like to see the ratios initially codified in the EBA and legislated in the future.

The ANF strike meeting next Wednesday will be held at the Perth Convention Center and more than 2,000 members are expected to attend.

The ANF proposed to move the planned operations and register the agency’s employees.

At the meeting, the nurses and midwives will vote on what further mass action to take, which could start the same day.

Asked whether such actions could put patients at risk, Ms Rea said they were already at risk.

“Patients are already at risk, every day we are operating below minimum safe standards,” she said.

“That’s why nurses are so scared and angry, because it’s not just a risk to themselves and their patients, it’s a risk to their reputation and their career.

“They can lose everything if a patient dies on their watch because they can’t get to them because their workloads are impossible.”

ANF ​​indicated that they have little hope that the government will sit down with an “acceptable proposal” before the meeting on Wednesday.

“We wouldn’t want to force their hand, but we’ve run out of options, we were completely open to postponing the meeting,” Ms Rea said.

“They literally said they don’t have an offer for us this morning, which is very disappointing.

“So it’s back to the government, the ball is in their court.”

Earlier in the day, the health minister said negotiations with the union were ongoing, but would not comment directly on the nurse-to-patient ratio.

The government leaves open the threat of the IR commission

Amber-Jade Sanderson has also not ruled out going to the Industrial Relations Commission to try to stop the proposed measures.

“I expect ANF to minimize disruption to patients, as all other unions in the health sector have done when they have taken industrial action,” she said.

“I would always prefer not to go to the commission and expect the union to do the right thing and minimize the impact on patients.”

Ms Sanderson said the decision to go to the commission to end any industrial action would ultimately be made by the Department of Health.

“They will be looking closely at patient safety and certainly the impact on hospitals,” she said.

In 2013, the ANF ignored the Commission’s recommendations to end industrial action.

At that time, union members closed every fifth bed for several days part of their drive to raise wages by up to 20 percent over three years.

The WA Department of Health has accused the union of putting patients’ lives at risk and asked the Industrial Relations Commission to intervene.

A further strike was averted shortly before it started when then Prime Minister Colin Barnett offered a 14 per cent rise.

As the leader of the opposition at the time, Mark McGowan sided with the nurses and said he believed they had a good case to make.

This time, Ms. Rea questioned what the government would submit to the Industrial Relations Commission.

“Well, they can go to committee, but they don’t have a proposal to bring to committee to say we’ve rejected or ignored,” she said.

“So it’s going to look pretty silly if they go to the commission, file a complaint, and they say, ‘Well, what did you propose to ANF?’ and they say, “well, nothing”

“They would look pretty silly if they did.”

The ANF has also appealed to the government to provide nurses with a proposed cost of living bonus of $3,000 now as a goodwill gesture while negotiations continue.

The union said WA nurses were the second highest paid in the country.